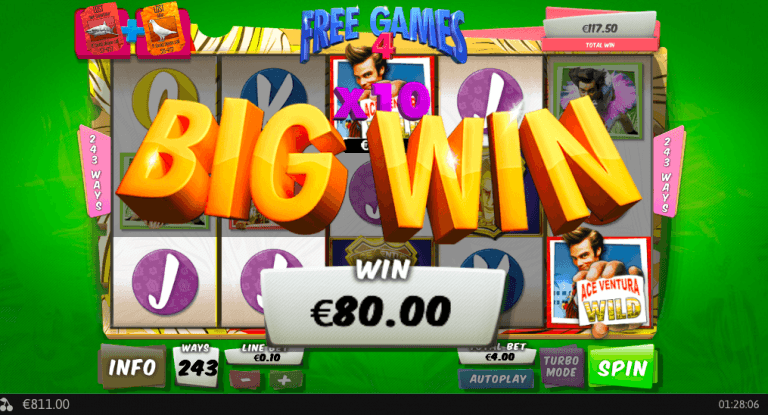 What is slot variance? Slot variance (also called volatility) is an indicator of how often huge (or even mega) prizes are won when playing that slot.

A slot with a high variance has more potential to pay out huge prizes than one with low volatility. When playing low or medium variance slots you can, on rare occasions, maybe win up to 100x to 500x of your bet.

High variance slots, when it comes down to it, offer you an “all or nothing” scenario. Win massive payouts or lose your shirt in a hurry.

Players that love and play the high variance slots don’t see this as a problem. They know exactly what they are up against.

This is precisely what the high variance slot players are playing for. No messing around with all these small or medium little prizes that in the end, don’t amount to much.

High variance of a slot versus high payout rate (RTP)

Don’t make the mistake of confusing the payout rate (Theoretical Return to Player or Theoretical RTP) of a slot with the variance of said slot.

The payout rate says something about how much a slot pays back to the player, on average, over the long term.

Slot variance is an entirely different beast. The variance of a slot is an indicator of how different value payments are spread out and is an excellent indicator of the risk-factor of a slot. High variance equals high risk, and low variance means low risk.

It is easy to see why playing a slot with a high payout rate is always advantageous. If the slot has a payout rate of 97%, then, in the long run, $€ 97 out of every $€ 100 played, is returned to the player.

The three low variance slots, we have picked are:

The three high variance slots we have chosen are: 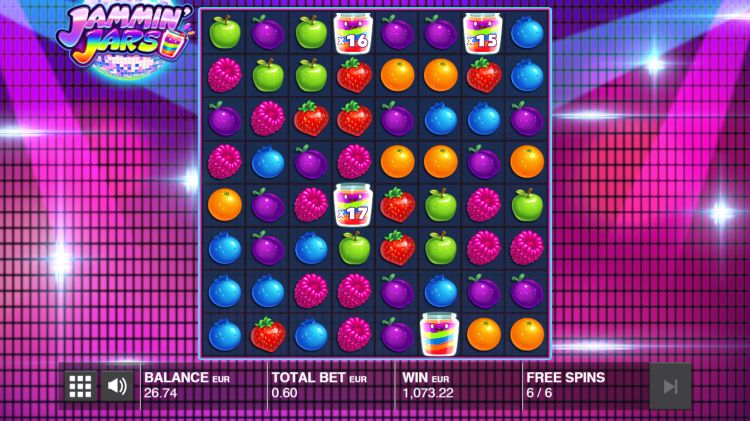 How high are the prizes of high and low variance slots?

So often do you hear about “low variance”, “medium variance” or “high variance” slots?

Unfortunately, explanations reach not much further than:

Are you not curious to know a bit more about the differences?

We performed surveys of hundreds of thousands of real money spins on high and low variance slots, to find out more about this phenomenon.

What did we learn? Well, for starters, we learned that slot variance is not only about the maximum size of the winnings. How often these massive prizes are paid out is equally as important. 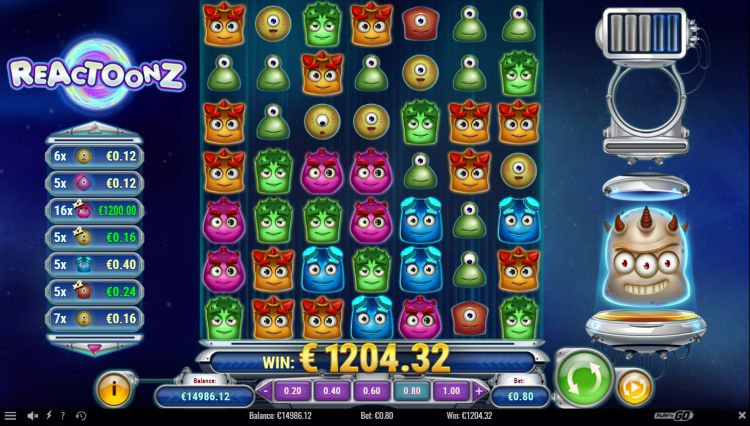 What size prizes do high variance slots payout? How often are these paid out?

The table below shows how often several types of prizes (from small to mega prizes) were paid out during our test runs. 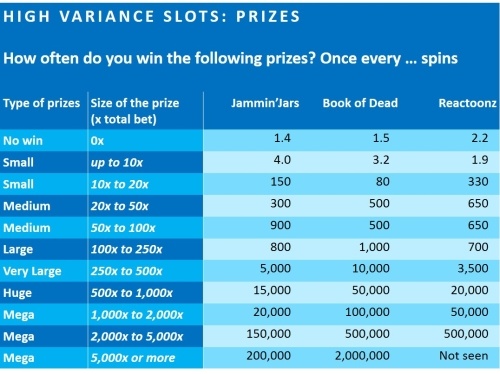 What makes Jammin’ Jars an extremely high variance slot, is the fact that mega prizes (1,000x your total bet or more) are paid out much more often than the two other volatile slots: Book of Dead or Reactoonz.

Book of Dead is a high variance slot. The chances of winning mega prizes (1,000x to 10,000x the total bet) are smaller than with Jammin’ Jars, which is the main difference with Jammin’ Jars.

Reactoonz is a spectacular slot! In more than half of the times (55% of the spins), you get a prize! Reactoonz is a high variance slot: it pays out huge and mega prizes, more often than Book of Dead. We have not observed prizes of 5,000x the total bet. 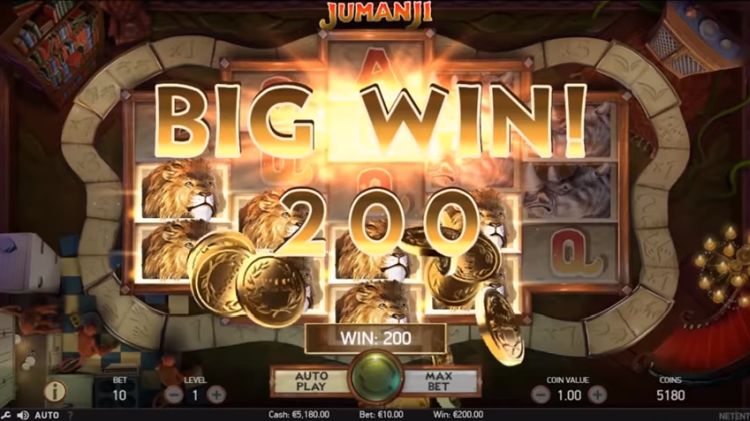 What size prizes do low variance slots payout? How often are these paid out?

The table below shows how often several types of prizes (from small to mega prizes) are paid out for three low variance slots: Blood Suckers, Starburst and Jumanji. 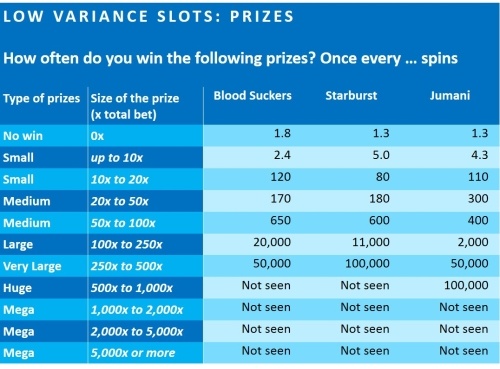 If you play Blood Suckers, don’t expect winning anything higher than 500x your bet. Never say never, but if you do, it will be a lifetime miracle.

Blood Suckers stands out for its high Theoretical RTP, which is 98%. Bloodsuckers pays out lots of medium-sized prizes (20x to 100x the total bet).

The story for Starburst is quite similar: lots of medium-sized prizes and some significant prizes. Not so, when it comes to huge rewards, let alone mega jackpots. When we spun 5,000 times with Starburst, the maximum prize we got, did not even top 70x the total bet. How low is that?!

Jumanji has a bit more variance than the Blood Suckers and Starburst. Huge prizes occasionally hit when you play Jumanji: these are incredibly unusual though. Besides, if you hit, expect something in the range of 500x to 1,000x the total bet. Certainly not a prize of, say, 5,000x the total bet.

Jumanji has more variance than Blood Suckers or Starburst, though. Jumanji is more a medium/low variance slot.

How much of the total wins are paid out in small and large prizes?

Another way to look at the differences between low and high variance slots is by looking at how much of the total prize money, is paid in small, medium, large or mega prizes.

The graph below shows the differences between the six slots. 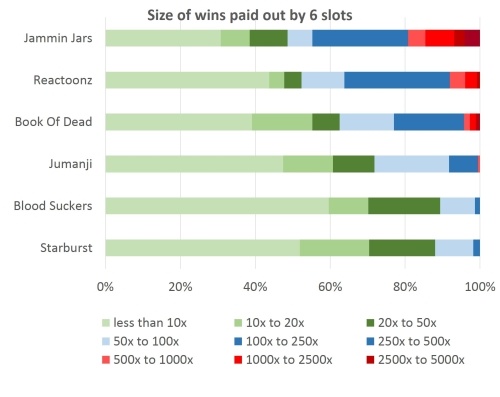 You see that for Jammin’ Jars (around 20% of the total wins are paid out in prizes of at least 500x the bet (red-coloured bars).

For Reactoonz and Book of Dead, these shares are around 8% and 4%, less but still substantial.

When is a slot low variance and when is it considered high variance?

What makes a slot get the label of “high variance” or “low variance”?

High variance slots pay out more massive wins (of at least 1,000x the total bet) as opposed to low variance slots, where the most substantial prizes (seldom) exceed 250x the total stake, let alone higher than that.