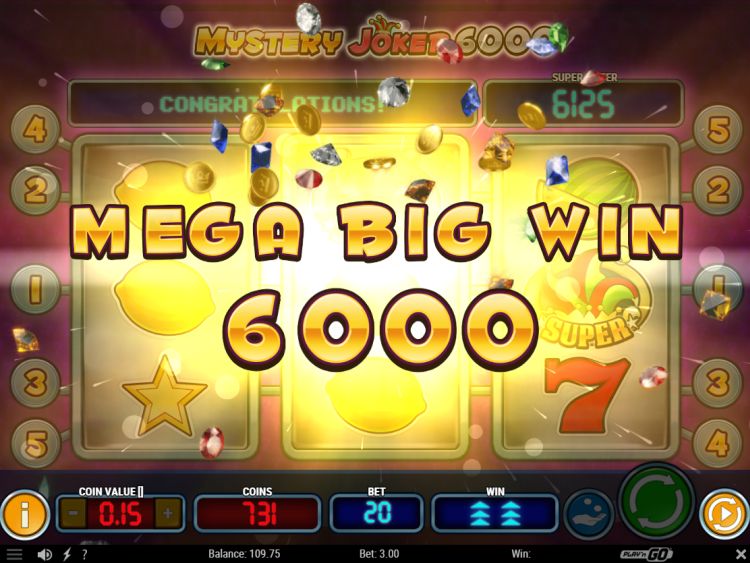 How high are prizes of low, medium and high variance slots payout? How often are the massive prizes paid out?

Slots have their mysteries….we all know that some slots can pay out massive prizes. Nobody tells you how often though. Is it realistic to win such prizes?

Doesn’t it bother you, if some highly reputable gambling websites or forums tell you that you need to find out for yourself? When you are “advised” to make thousands of spins per slot, to get an idea of the size of prizes paid out by the slot.

So, putting it bluntly, you need to do thousands and thousands of spins. At your expense and your valuable time. Preferable for as many slots as possible, to understand better what the slots payout.

We felt we should do what others failed to do and help you.

We did this research and “tested” over 50 of the most popular slots, by performing extensive surveys (5,000 spins per slot with real money).

Additionally, we examined the web to get more information on prizes these slots payout. Our research was indeed costly and exceptionally time-consuming. It took months! Imagine, you having to do all this work like you have nothing better to do…

In this article, we share with you, our findings. We counted how often certain prizes are paid out. We tried to understand the vast differences between the SIZE AND FREQUENCY of prizes paid out by low, medium or high variance slots.

We learnt that there are significant differences in the kind of prizes paid out by slots. Looking more closely, we found out that slots belong to one of the four kind of slots:

What prizes do low, medium and high volatile slots payout?

Below we show you what prizes are paid out by all four different groups of slots.

We selected eight slots in total:

Why did we choose these slots? Simply because these belong to the most popular slots. These are a mix of old classics (slots with a long and excellent track record) and some of the newest slots, that have gained lots of popularity over the most recent years.

With Starburst, you see that prizes of 20x to 50x your total bet is paid out once 180 spins. Starburst stands out for this type of (medium-sized) prizes. Compare this to Book of Dead or Reactoonz. These slots payout this awards of this size, once every 500 and 700 spins respectively.

With Starburst or Bloodsuckers, we did not see prizes exceeding 500x the total bet. If it is paid out, it is a certainly a miracle. These are called low variance slots for a reason: a lack of massive prizes.

On the contrary, with Jammin’ Jars, an extremely volatile slot, massive prizes are much more common. For example, awards in the range of 1,000x to 2,000 the total bet, is paid out once every 20,000 spins.

You see that the prizes paid out of these four slots are the difference between day and night!

The high variance slots, on the other hand, pay the real massive rewards more often. 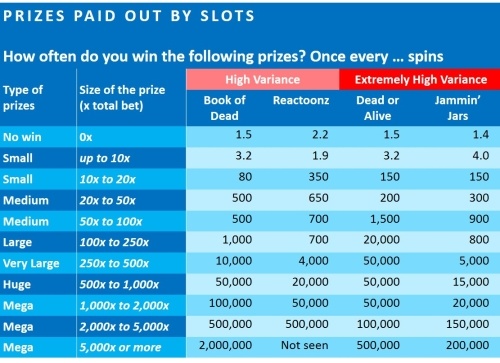 How much of the total wins are paid out in small and large prizes?

Another way to look at the differences between low and high variance slots is by watching how much of the total prize money, is paid in small, medium, large or mega prizes.

The graph below shows the differences between the eight slots. 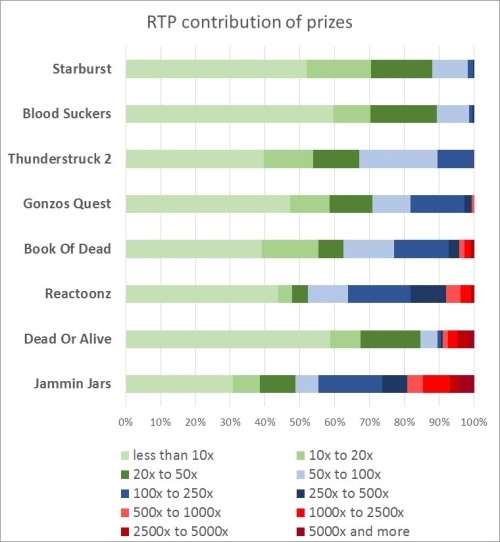 The low variance slots (Starburst and Blood Suckers) mainly payout smaller prizes. Around 90% of the total prize money are prizes up to 50x the total bet (the green coloured bars in the graph).

You see that for Jammin’ Jars, around 20% of the total wins are paid out in prizes of at least 500x the bet (red-coloured bars). Reactoonz and Book of Dead, these shares are around 8% and 4%, less but still substantial.  These slots are high variance for a reason!

Looking further at Jammin’ Jars, you see that “only” about half of the total wins are paid out in prizes up to 50x the bet (see green coloured bars). Compare that to the lower variance slots of Starburst and Blood Suckers.

Dead or Alive differs from the other slots, as the share of the medium-sized prizes from 50x to 500x the total bet (the blue coloured bars) is around 5% only, which is very small. This slot is extreme: it pays out a lot of smaller prizes or a massive prize, once in a while. The name for this slot could not have been chosen better!

The medium variance slots (Gonzo’s Quest and Thunderstruck 2) mainly pay out small or medium prizes (up to 500x the total bet). The share of massive prizes (of 1,000x the bet or more) is (almost) zero.

Conclusion – the mystery of the payout of slots revealed

The tables above hopefully give you a better feel of what you can expect. At least, no need to do thousands of spins per slot, to find out…