Troll Hunters is a popular Play ‘n Go video slot that is based on Norwegian folklore, telling tales of trolls roaming the woods of Norway.

We’re not talking cute little troll dolls from the 90s though, but enormous, strong, hideous trolls. Exactly the type that badass Norwegian Vikings like to hunt.

As one of the first video slots released by Play ‘n Go, it certainly put this video slots developer on the map.

Does that make this a top-notch video slot?

Although the concept of dropping symbols and ascending multipliers can work out great (see for example Gonzo’s Quest), we think Troll Hunters failed in several ways. 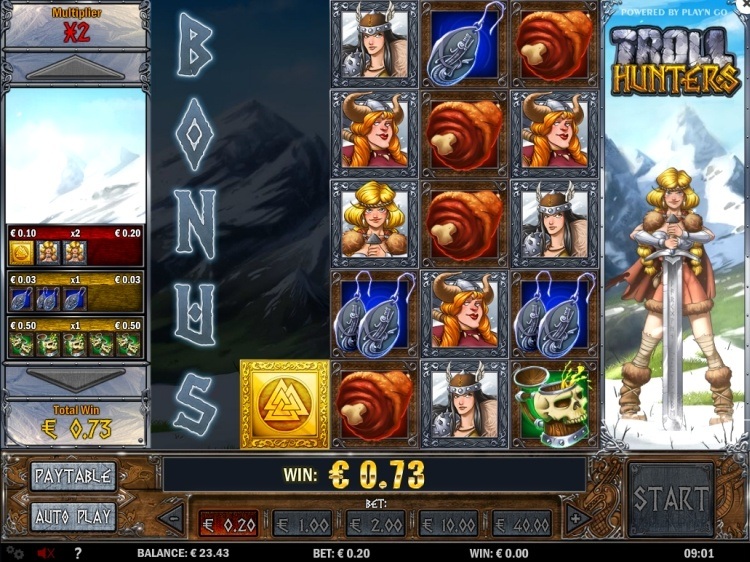 The slot’s main symbols are three of the toughest Norwegian Vikings, further complemented by beer, juicy hams and amulets. Troll Hunters uses cascading reels, where the symbols drop down and vanish when any winning combinations appear. There are no standard paylines. If you spin three or more symbols on a vertical or horizontal line, you win a prize. With a winning combination of three symbols, the middle symbol turns into a sticky wild, which can ‘stick’ in place for a few spins. Very useful for unlocking multiple winning combinations in a row.

If you manage to unlock the entire playing field, you win 1,000 x your bet.

The multiplier also increases up to a maximum of 7 x with each winning combination. However, don’t be fooled into thinking Troll Hunters is a high variance video slot, for it is not.

The variance is quite low, causing you to win lots of small prizes and incidentally a medium prize of  15 to 30 x your bet if you’re fortunate. It seems almost impossible to get a lucrative payout with Troll Hunters. That goes for both the base game and the bonus game.

This way, Troll Hunters may give you a lot of playing time, only to slowly but surely bottoming out your account balance.

The 96.73% payout rate of Troll Hunters is excellent. However, the variance is extremely low, making it uninteresting for players who prefer to take some more risk. 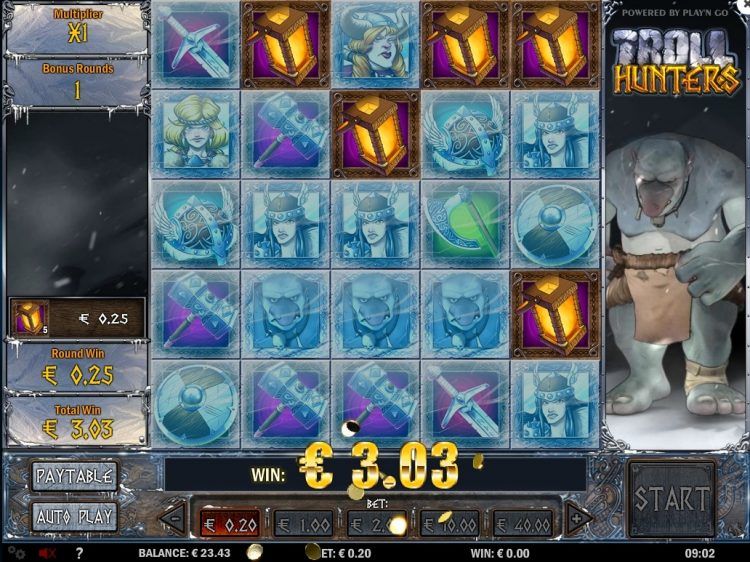 You activate the free spins bonus if you manage to form a complete vertical column with the word ‘bonus’ in it. Here you get 10 free spins, where the number of winning symbols on the screen is counted per spin. You have to hit a minimum of a five-of-a-kind to win a prize. Moreover, if you unlock multiple columns with the word bonus, you are awarded an extra multiplier during the bonus round: 2 columns = x 2, 3 columns = x 3 and so on.

As with the base game, the main issue we encounter here is, you never win anything substantial. Nine out of ten bonus games you win nothing more than a mere 20 x your bet, which is just not enough to keep things interesting. On the plus side, free spins can be re-triggered, up to a maximum of 20 extra free spins.

Our verdict on Troll Hunters

Although we usually thoroughly enjoy playing Play ‘n Go slots, they completely missed the mark on this one. The slot concept is entertaining, but its variance is painfully low, and there’s too big a jump between the mere minimum bet of $€ 0.20 and the next lowest bet of $€ 1.

Plus, the fact that you rarely win a decent prize with the free spins bonus doesn’t sit well with us. A bonus round should be able to make up for a loss-making session instantly, and that is not going to happen with Troll Hunters.

However, we can well imagine some players may appreciate Troll Hunters. You get a lot of playtime for your money, and with a minimum bet of 0,20 euro per spin, it’s ideal for the recreational player.

Where can you find Troll Hunters?