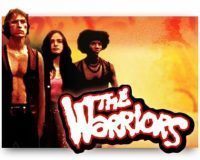 “Warriors, come out to play” is the iconic quote from the 1979 cult movie ‘The Warriors’.

In the film, the leader of the Warriors gang is wrongly accused of murder and all the other gangs of New York organise a manhunt to catch him and his gang members before they reach the safety of their home turf.

Earlier there has already been a computer game released, based on this classic cult movie. The online casino game developer iSoftbet has now used this post-apocalyptic movie as a theme for this video slot.

The symbols consist of pictures of the characters, the leader of the gang Swan, Mercy, Cowboy and Cochise. The card symbols are sprayed on the reels, graffiti style.

For the rest, the design is quite bare. During the game, you hear the typical sounds of New York City such as the traffic and machines used for roadwork, but even the sound effects and the background music are not spectacular.

We tried out The Warriors video slot by iSoftbet for you to see if the features and the prizes can spark some enthusiasm about this game in us. 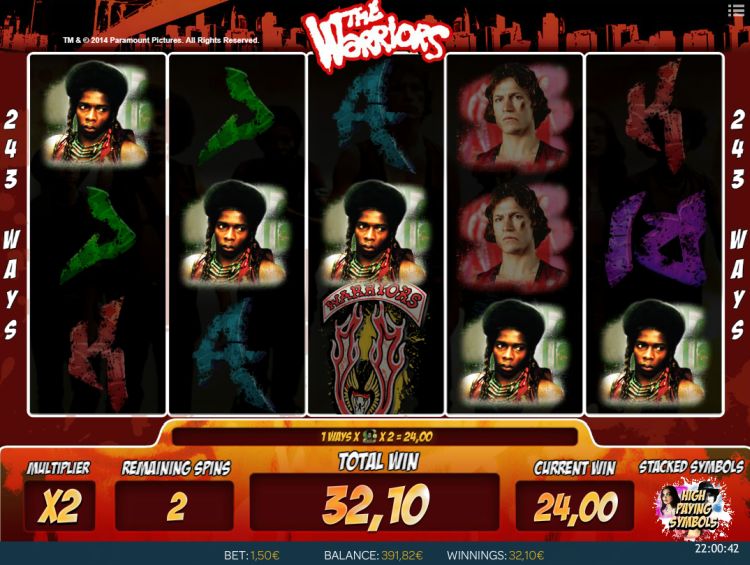 How does The Warriors slot work?

The Warriors video slot is a game with 5 reels and 3 rows of symbols that are all related to the classic cult movie. The game has no fixed paylines like traditional slots, but the win all ways mechanism is active (243 ways to win). This means that if a symbol occurs on 3 or more active paylines from the reel on the left, you are guaranteed a prize, regardless of your position on the reels

Some symbols even pay out if you spin them on the first 2 reels.

The minimum bet in The Warriors video slot is $€ 0.50. With the maximum bet of $€ 250 per spin, this game is also interesting for the high stake gamblers amongst us. The payout rate is seriously low for an online casino video slot and lies at just 95.01%. We estimate the variance of the game to be medium.

The symbols that you have to use to try and create winning combinations consist of pictures of the characters from the movie. The highest paying symbol is the picture of Mercy, the girlfriend of the main character. Spinning 5-of-a-kind of this high-value symbol will get you 2,000 coins per winning combination.

The wrongfully accused Swan is good for a 1,000 coins per combination when you spin 5 of the same ones on the reels. The loyal gang members Cowboy and Cochise will net you 500 and 400 coins per winning combination if you manage to get five identical ones.

The symbols with the pictures of Mercy and Swan are the only ones that will payout with just 2 of them on the reels.

Further, you will find, like in many other video slots, the well-known card symbols: 10, J, Q, K and A. Only, in this case, keeping with the 1979 New York style, they are sprayed on to the reels with spray cans. These are the low-value symbols of the game, and by spinning 5-of-a-kind of these on the reels, you can get a maximum of 400 coins per winning combination.

You recognise the Wild symbol of the game, which is a picture of the loving couple Mercy and Swan together. The Wild symbol replaces all other symbols of the game except for the bonus symbol.

The Wild symbol can only drop onto reels 2, 3, 4, and 5. If the Wild symbol with Mercy and Swan is part of a winning combination, your prize will be doubled. 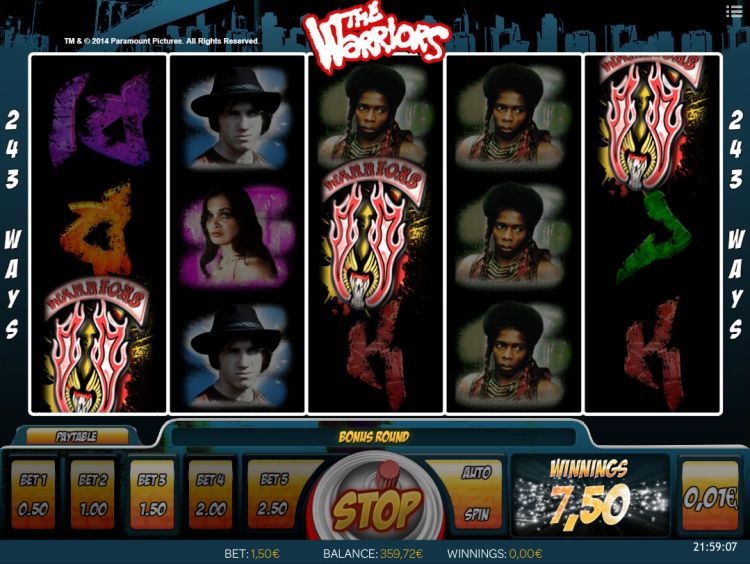 The leather jacket with the logo of the Warriors gang is the bonus symbol of the game. If you spin at least three bonus symbols on the first, third and fifth reel, you activate the bonus round.

These combined bonus boosters can make the Free Spins Bonus of The Warriors enormously lucrative. 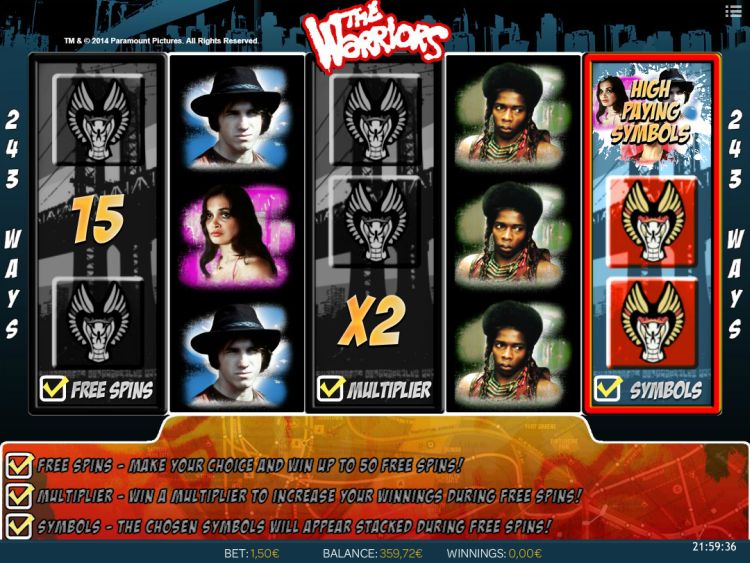 Our verdict on The Warriors video slot

I find The Warriors video slot, as far as design goes, a bit dark and bland.

The sound effects and background music are also not of high quality. However, I can imagine that some people find that it suits a 1979 cult movie. I do think the low payout rate of 95.01%, is disappointing.

If you prefer graphically beautifully designed games, then you are probably not going to find that The Warriors is for you. But if you are about winning big money, then you should try this creation by iSoftbet out.

Where can you find The Warriors?