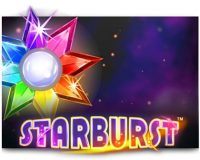 Starburst is the most popular online slot in the world, period.

There is something about those soothing, almost hypnotising sounds and graphics that keep us coming back. And back, and again.

Starburst was developed by Netent and has proven to be an instant hit all over the globe. With a distant space theme, Starburst is filled to the brim with stacked symbols, expanding wilds and retriggers.

Due to its simple gameplay and easy to understand game mechanics, it is the ideal slot for new slots players. 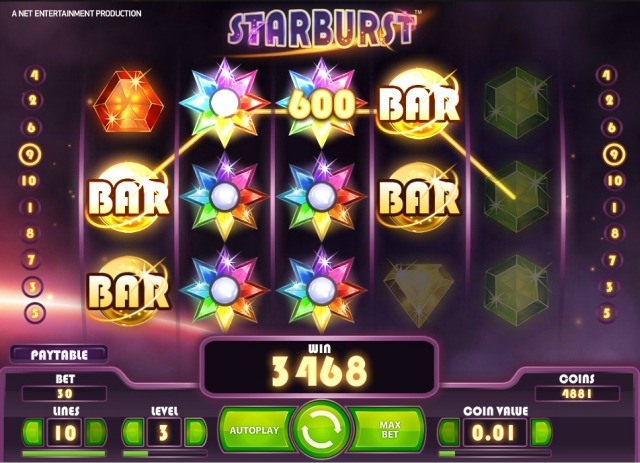 Win up to three respins with stacked Starburst Wilds

Although the base game is fairly standard with a 5 x 3 set up and stacked symbols, Starburst comes to life whenever the Starburst symbol lands on one or more of reels 2 to 4. When this colourful symbol hits, the entire reel is made wild, and one respin is given. A maximum of three reels can turn wild with up to three respins.

If you can get two or three entire reels wilds with some of the higher paying symbols (preferably the Bars or Sevens), significant payouts can happen. 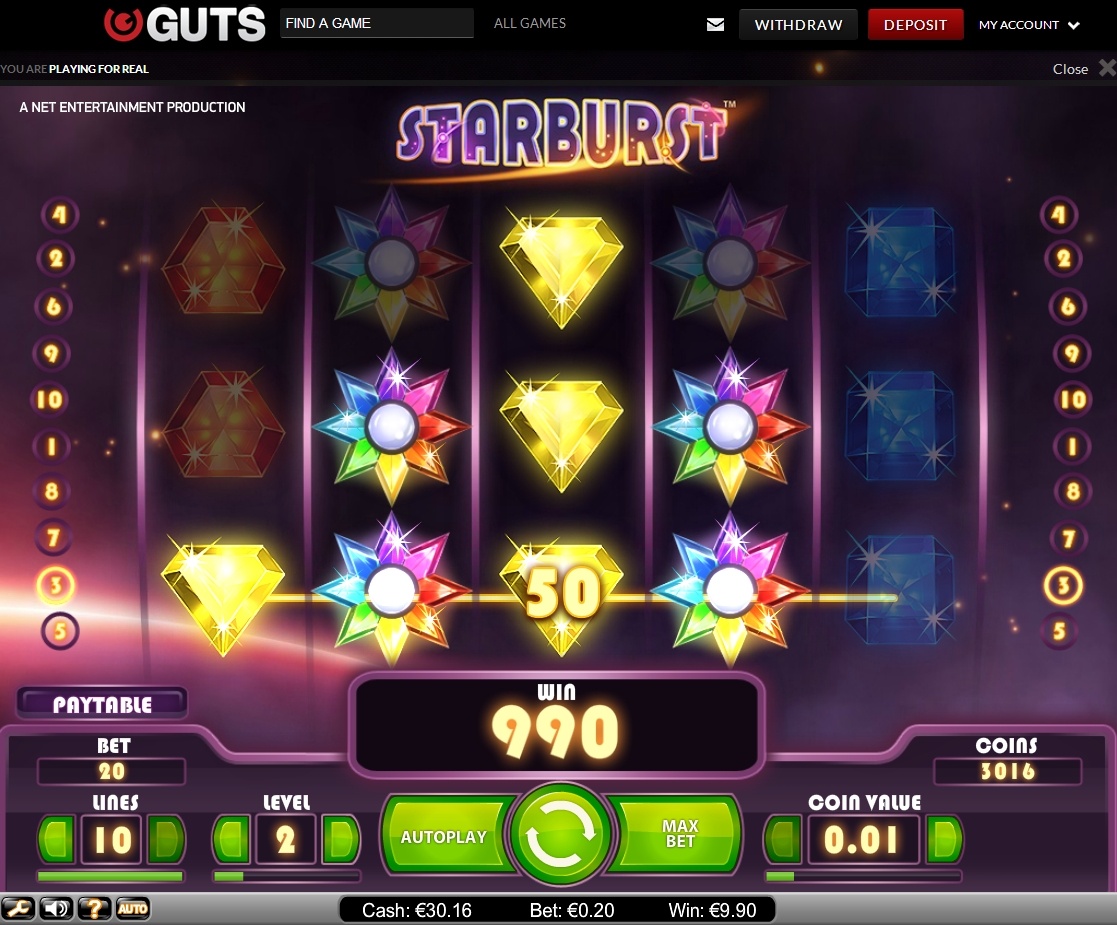 Starburst always seems to come in bursts (pardon the pun) of winning streaks for me. Sometimes you can have substantial dry spells with hardly any (multiple) wild reels or big or even medium wins and other times when Starburst is in a giving mood, and you cannot seem to lose.

Starburst is an ideal slot for me to play when I am down on my luck. If it is not in a good mood, I will quickly move to another slot. But if this slot is riding that positive payout wave, Starburst has turned many losing sessions around for me.

We have put together an extensive financial analysis of the Starburst slot, including:

Our results on 5,000 real money spins on Starburst

We played 5,000 spins on Starburst with real money.

Just how well did the world’s most popular online slot treat us?

Here are our results. 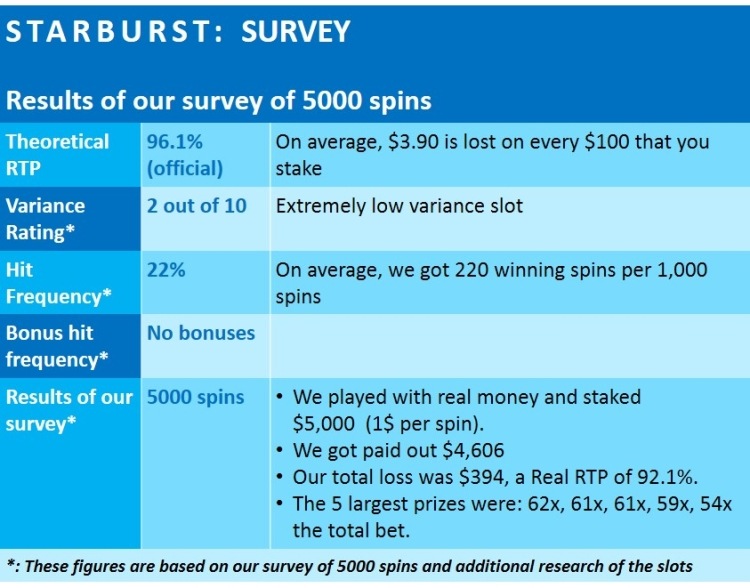 What kind of prizes does Starburst payout?

Starburst is one of the lower volatile slots. This means that Starburst pays out more smaller prizes compared to most other slots.

Take, for example, prizes of 20x to 50x or 50x to 100x your total bet. These prizes are paid out once 200 and once every 600 spins respectively. Starburst stands out for these type of prizes: mediums sized and still substantial.

Rewards of 500x your total bet or even higher are not realistic with Starburst. 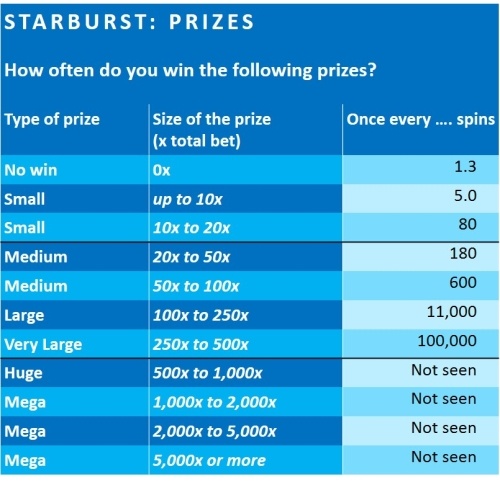 What are my chances of winning with Starburst?

For the sake of comparison, the total amount wagered is $€100 in both cases.

You see that your chance of winning at least 5x your bankroll ($€500) or more is 0% if you spin 100 x ($€1 per spin). You see that you have no chances to win big with this slot. This is in line with what you would expect with a slot as Starburst.

Starburst and the “Hit and Run” strategy

The table below shows the chance of meeting the target first: 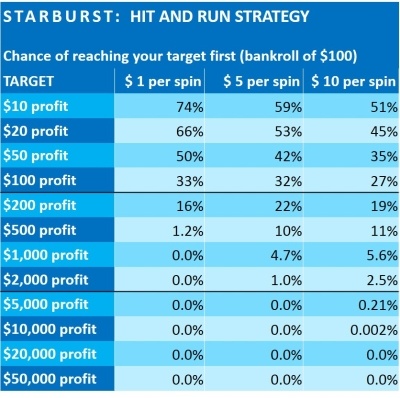 The Hit and Run strategy works well with Starburst if you do not aim to make a massive profit.

If you choose to aim for higher a profit (of say $€2000 or more, 20x or more times your bankroll), you are better off with medium or high variance slots.

Conclusion: Starburst is an extremely low variance slot, ideal for players who like to play it safe

Starburst is the perfect slot for players who want to play safe. Starburst does not have too much downside risk. There is some upwards potential, not as much though as with more higher variance slots.

Starburst: the most popular online slot

Love it or hate it, Starburst remains the single most played online slot to this day.

It is a simple, yet mesmerising slot that can either enthral or irritate you to no end.

Where can you find Starburst?

Plenty of online casinos will throw in Starburst free spins bonuses for new players, so make sure to benefit from that.