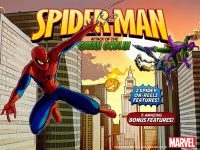 Spiderman: Attack Of The Green Goblin was one of the most successful Playtech slots under the Marvel franchise.

The Marvel franchise series was insanely popular, especially with UK online casino players, and that is not just because of the rise of these superheroes in movies. The Marvel slots were of very high quality, in all aspects.

Spiderman: Attack Of The Green Goblin looks fabulous: a brilliant, evocative intro and a beautiful “drawn” style. Furthermore, everything is exceptionally crisp and colourful; like the original comics. The game oozes atmosphere.

The bonus games (that drop often as well) also carry the real Playtech trademark: inventive and with a bit of luck you can get a handsome payout. 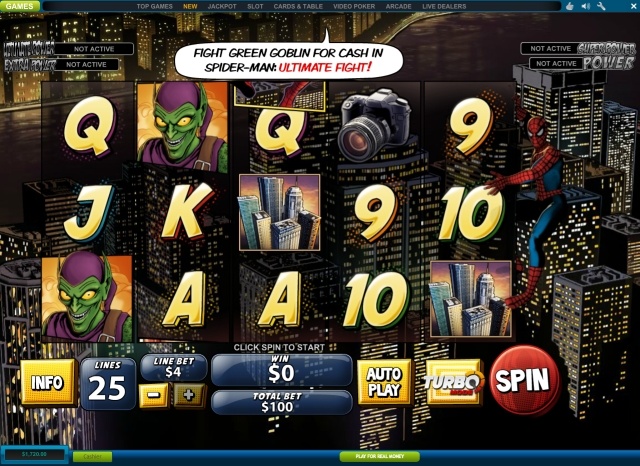 The base game of the Spiderman video slot

At first glance, the base game seems without any surprises. Twenty-five paylines and the Spider symbol is wild. The city serves as the background for the game. The slot is also infused with lots of symbols linked, one way or another, with Spiderman (Spidey for his friends) or his alter ego, Peter Parker. Think of cameras, newspapers, his girlfriend and of course his big rival: The Green Goblin.

It all fits in perfectly with the feel of the game, and you will soon lose track of time. But there are also two fun features hidden away in the base game. The Spiderman Wild Feature gets you one or more extra Wilds randomly. The Spidey Snapshot Feature awards you between 3 x and 10 x your bet.

With three scattered Spiderman symbols on reels 1, 2 and 3 you win 1 of the bonus rounds. Besides, there are four progressive jackpots to be won. These drop randomly, and because they are linked to other slots, they rise extremely fast.

The smaller ones, consequently, drop very frequently: don’t be surprised if you win these a couple of times in 1 session. Another great find: there is a turbo button, you can switch on and off, to speed up the tempo of your game. 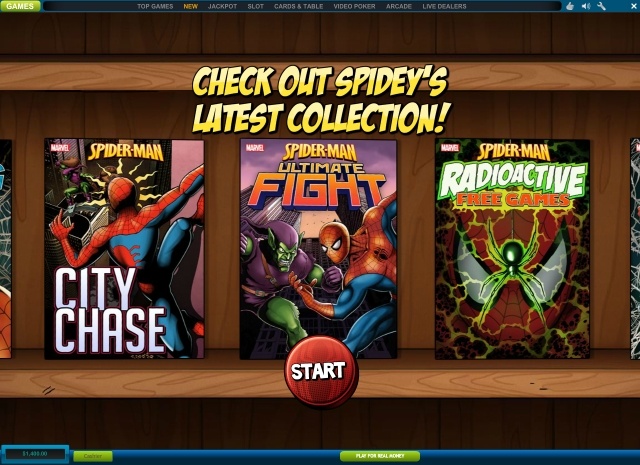 A few things stand out right away when we look at the bonus rounds of Spiderman.

Firstly: they drop very often. Which is, of course, always nice.

Secondly: There are at least five different bonus rounds to win that are jam-packed with surprising elements.

You can win the “Rivalling Free Games” for example, where you face off against the Green Goblin. The better you do, the more free spins and the higher the multiplier rises.

But also the City Chase, whereby you roam the city and collect credits and mini bonuses all the time, is a fabulous bonus feature.

Playtech shows with Spiderman once again why they are called the king of the bonus rounds (as far as we are concerned anyway). Because of the great diversity and the originality of these bonus rounds, Spiderman is an absolute delight to play.

4 Reasons to let yourself be caught in Spiderman’s web: 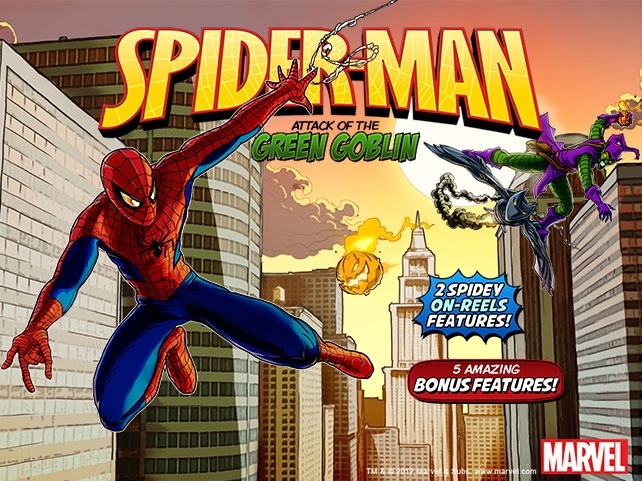 Our verdict of the Spiderman: Attack Of The Green Goblin slot

Spiderman: Attack Of The Green Goblin is genuinely a superb slot. Beautifully designed and full of surprises, little and big.

On top of that bonus rounds drop very frequently, which is, of course, something we like to see. A top Playtech video slot!

Epilogue: Unfortunately, because of the takeover by Disney of Marvel and the expiration of the licencing agreement with Playtech the Spiderman: Attack Of The Green Goblin video slot has been removed from all online casinos.

We will have to make do with the great memories of this epic slot.

Where can you find Spiderman: Attack Of The Green Goblin?

Sadly, Spiderman: Attack Of The Green Goblin has been discontinued since Disney bought Marvel.

You can, however, find other entertaining Playtech slots at Slots Million, which is a very reliable online casino, with a massive selection of slots.