What a blast it must be to work at the offices of Play’n GO.

Not only are they hugely successful with their many high-quality slots, but they are more into classical hard rock than the shit music played on the radio or streaming services today.

Call us old-fashioned (yes we still listen to the radio), but the music used to be really better, right?

Play’n GO has already released a whole bunch of rock-slots, especially about bands that aren’t considered to be among the best in the world, but who has definitely made a name for themselves in the rock scene.

Think of bands like Sabaton, Annihilator, Twisted Sister, Testament and Black Mamba. Okay, that last one, actually no one had ever heard of them before. But apart from that, all pretty good B-category bands. 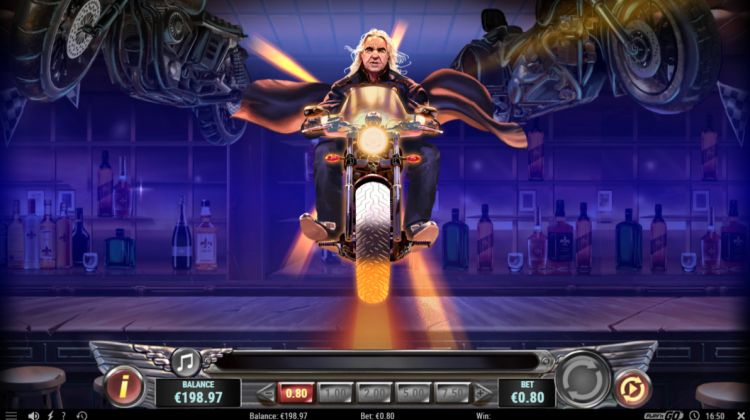 Who’s Saxon? – A little side step

Saxon is a British Heavy Metal band founded in 1976, and that was part of the NWOBM, the New Wave Of British Metal. Bands like Iron Maiden, Def Leppard and Motorhead (RIP, Lemmy) belong to the same movement.

Of the original members, only Biff and Paul Quinn are still part of the band.

Is the Saxon slot any good, and can you bring home the bacon with it? 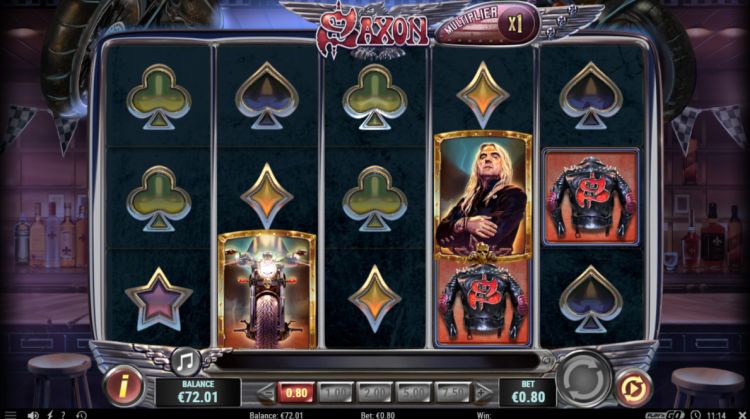 The Saxon slot is, just like the music of the band, straightforward.

The tempo is high, the Saxon songs sound from the speakers, and apart from that, you can just start spinning and (head)banging.

The playing field consists of five reels with three rows of symbols and 10 fixed paylines.

This is  a high variance Play’n GO slot, with a theoretical payout rate is standard at 96.24%.

Please note that there are also versions with a lower payout percentage. So it may pay off to shop around a bit, as far as online casinos are concerned. 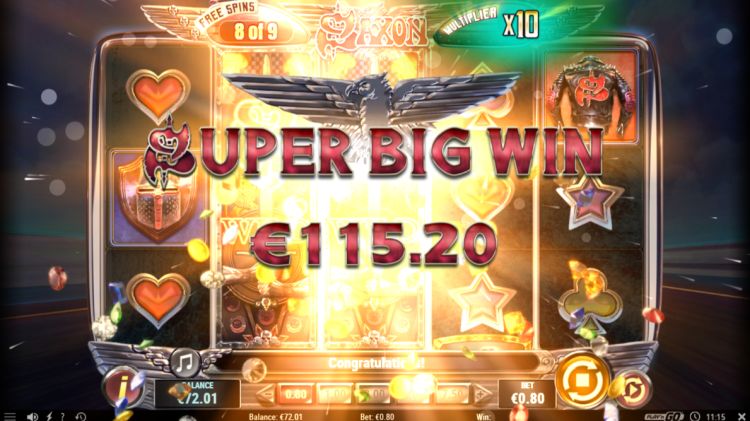 The Saxon logo is wild and always consists of a whole stack, which covers the entire reel. Wilds replace all symbols except the scatters.

If spun five wilds, you always have a screen full of them (because they are stacked). Five wilds on an active payline are worth 50 x the bet.

The premium symbols consist of a leather jacket, an eagle and a knight’s helmet. Spin five identical ones for a prize between 20 x and 30 x the total bet.

The star and the card symbols (hearts, spades, diamonds and clubs) are the low symbols and will award you between 7x and 12x the total bet.

Each roll that is completely covered with the same symbol awards you an additional multiplier of +1.

If you spin a stacked wild, the multiplier is even increased by +2.

And then your prizes can skyrocket. If you hit a full screen of wilds, you’ll not only grab 10 x 50 x the bet, but also a 10 x multiplier. The payout then increases to a whopping 5,000 x the bet. 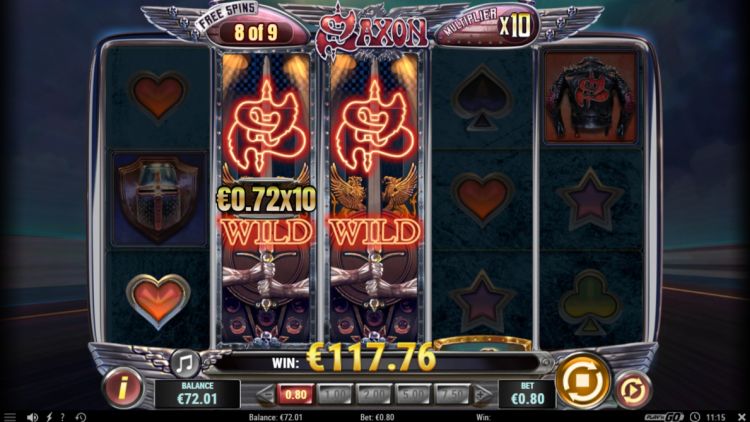 As soon as (lead singer) Biff and his motorcycle drop on reels 2 and 4, the free spins bonus is activated.

You are awarded between 5 and 15 free spins, which can be retriggered indefinitely.

During the free spins, the only difference with the base game is that the multiplier is not reset.

Each full stacked reel will grant you an extra multiplier, and it will remain in place for the rest of the free spins.

It’s an adrenaline-boosting bonus round which can make or break you.

Our verdict on Saxon

Right, since we’re real Metal-heads ourselves, you’ve already got us on board.

But apart from that, Saxon is also a superb slot, where you can land super big wins, equaling vast amounts of money, both during the base game and the free spins.

Also, the theme, although here and there a bit dark, is very well developed, and of course, it’s great to hear the real Saxon songs in the background.