This immense squid is known for being able to grab entire ships and crew members with his imposing tentacles. Should we thank Play’n GO for coming up with a fresh new slot theme? After all, as far as we know, they were the first to transform the myth into a (low variance) slot game, the Eye of The Kraken slot… Play’n GO thank, you!

Anyhow, Pragmatic Play has opted for a light-hearted approach, with cartoon-like graphics and a kind of controlled chaos. All sorts of things happen at the same time, and you don’t have a moment’s rest.

Sometimes you win a mini bonus feature, then a free spins bonus or a pick and click bonus, all in a speedy game tempo.

The RTP, variance (volatility) and maximum win of Release the Kraken

The RTP is 96.5%, which is the RTP of most Pragmatic play slots nowadays. No reason to complain here.

Although, we all know that Pragmatic Play likes to release slots with enormous maximum wins (for example, Peking Luck with a maximum win of 180,000x the bet or Buffalo King with a bullish top prize of 93,750x the total bet).

Now we also know with Pragmatic Play, these are entirely theoretical numbers. Maybe one spin out of 100 billion will land you the grand prize. Since the variance of Release the Kraken is medium to high, wins of around 1,000x the bet are pretty realistic with this slot. 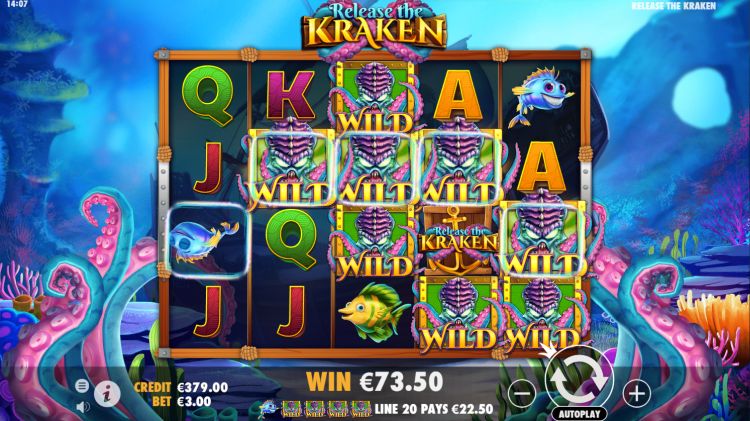 Release The Kraken has 5 reels with 3 rows of symbols and 20 fixed paylines. 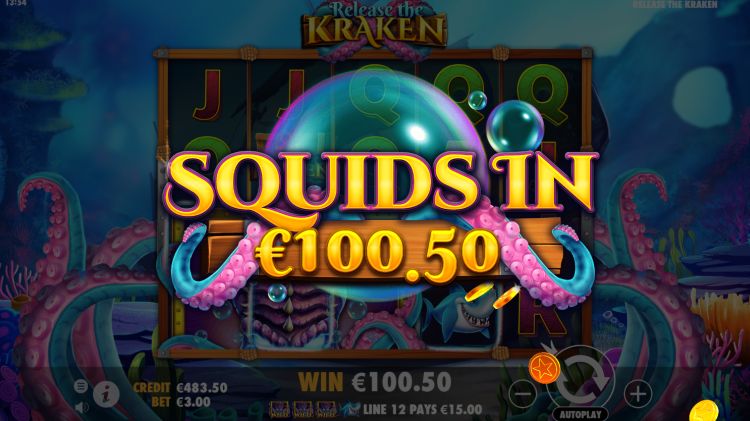 The Release The Kraken symbol is stacked and is worth the most: 25 x the bet for a 5-of-a-kind. If you manage to spin a full screen with these symbols, you get 500 x the total bet.

The wild pays out as much as the Release The Kraken symbol but also has the advantage it replaces all other symbols except the scatters.

As medium value symbols, a shark, turtle and two merry fish are appointed — spin 5 of the same symbols for payouts between 5 x and 12.5 x the total bet.

Finally, the card symbols J, Q, K and A, as (almost) always end our sum up. They are worth between 2 x and 4 x the bet in case of 5 identical ones on an active payline. 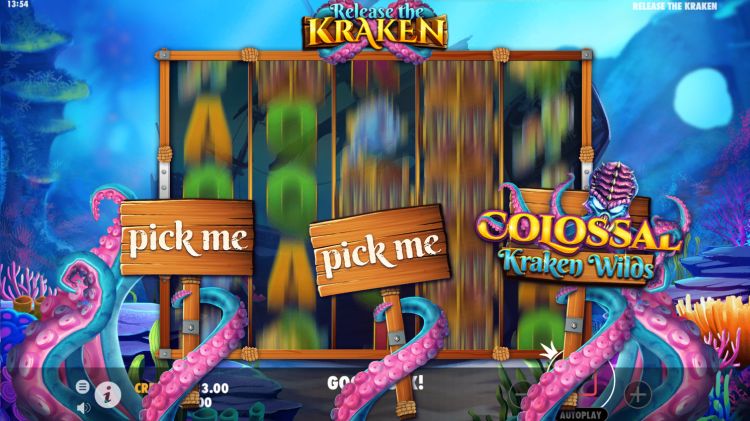 You can win a lot of bonuses with this video slot: three mini-features and two main features.

The mini features are random: the Kraken then shows itself for a moment and holds up three plates with its tentacles.

Choose one of them and win:

Infectious Kraken Wilds: win several wilds appearing on the reels that multiply when they “infect” each other.

Spin two scatters on the 1st and 3rd reels and a special scatter on the 5th reel to grab a big bonus feature.

Roaming Kraken Free Spins: you get free spins you play on twice as many paylines. The multipliers increase with every wild that drops and these wilds move across the screen every turn.

Sunken Treasure Bonus: Now, you win cash prizes by pointing out treasure chests. The bonus ends when you reach ‘Collect.’ 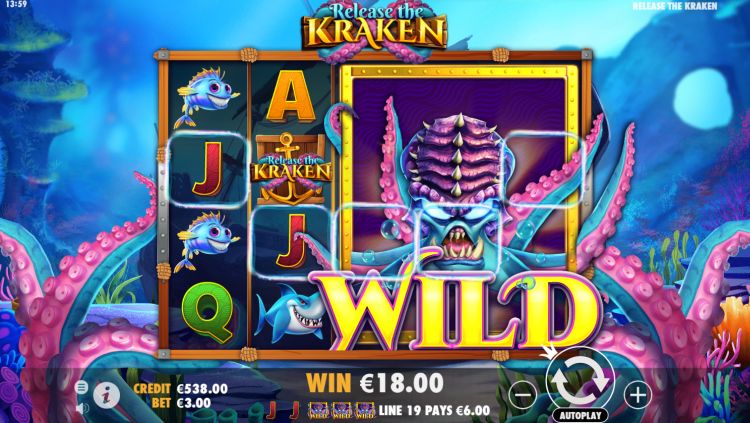 Our verdict on the Release The Kraken slot?

With Release The Kraken, Pragmatic Play has delivered a very impressive slot.

You can win all sorts of cool bonuses and what’s also sweet: even the mini features can award you more than decent sums of money. The high return to player adds even more value to an already enjoyable game.

Although the Kraken theme has been done a few times before. At least they executed it well, and the artwork looks stunning!

Where can you find Release The Kraken?