A proven Microgaming strategy is to release as many slots as possible while keeping the development costs low.

With Lock a Luck, they managed this to perfection.

For starters, they copied a tried and tested formula (twin reels and 243 ways to win) — a recipe we have seen with the Netent slots Twin Spin and Twin Happiness.

On the side of things, they did not overspend their budget either. It is overly simplistic.

Microgaming was so smart to change the name and replace the name “Twin” by “lock”. The latter refers to reels that are “locked” to each other.

Lock a Luck has the design of a traditional slot with lucky symbols and the gameplay that is the same as that of Twin Spin. With the famous “Linked Reels” feature or what Microgaming calls, the “Locked reels”.

With the “Locked Reels” feature, each spin has at least two identical reels. It implies that the symbols will be precisely the same, in the exact order.

It is a very straightforward feature but effective and easy to understand. It can also be lucrative, in particular, if you get 3, 4 or even 5 identical reels! Imagine having 4 or 5 identical stacked reels (starting from the left of course). 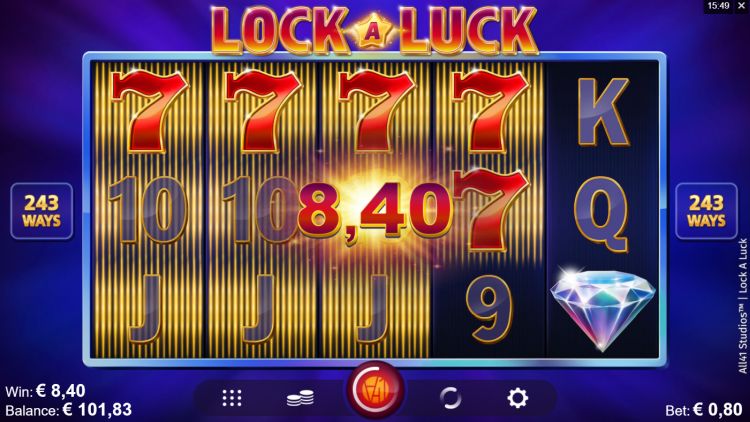 What are the theoretical RTP, the variance and the maximum win of the Lock a Luck Slot?

The theoretical Return to Player is 96.37%, which is slightly above the average of the online slots offered by most providers. Nothing spectacular and marginally lower than the RTP of Twin Spin or Twin Happiness.

We qualify the Luck a Lock slot as a medium variance slot. 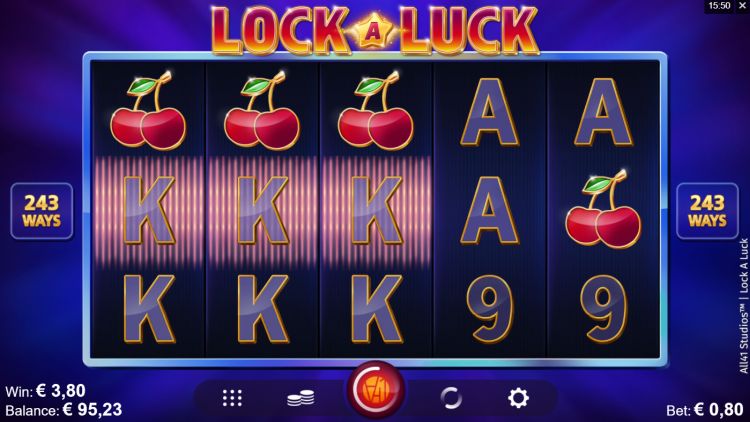 Gameplay and features of the Lock a Luck slot

Lock a Luck has no paylines, but the ‘243 ways to win’ mechanism. You win if you have at least one identical symbol on the first 3, 4 or 5 reels.

As said above, at least two reels will be identical, thereby increasing your chances of getting a winning combination.

There are five premium symbols, six playing cards and one Wild symbol, which can replace all symbols.

The five premium symbols are the Diamonds, a cloverleaf, a golden horseshoe, of course, red sevens and a pair of cherishes.

The lower paying symbols are the six playing cards.

The Diamonds pay the most. If you manage to get 5 of these on the 5 reels, you are awarded 50x the bet for each winning combination.

If you play a combination with more than one symbol on at least one of the reels, you are heading off to the more massive payouts. For example, two identical symbols on all five reels do not count as just two combinations, but as 32 combinations (calculated as 2x2x2x2x2).

If you spin three identical symbols on the five reels, you have  (3x3x3x3x3=) 243 winning combinations.

Like Twin Spin, Vegas Party or Twin Happiness, Lock a Luck does not have a separate bonus free spins feature.

It has only the “Locked Reels Feature”, which does occur every spin, though.

How does it work exactly?

The minimum number of Locked Reels you get is two for each spin. If you are lucky though, it could also be 3, 4 or even 5. We guess you can see that it can become more lucrative if you manage to get 4 or 5 locked reels. 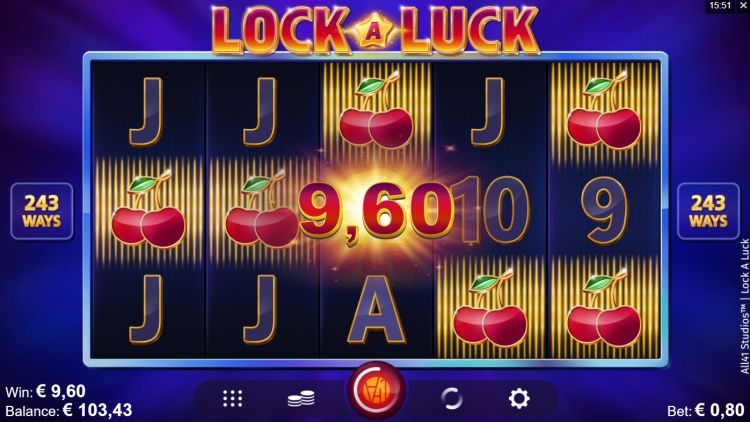 Our verdict on the Lock a Luck slot

Lock a Luck is ideal if you are looking for fast and straightforward action, without too many sophisticated bonus features and free spins. It is a easy slot to understand, and this is what some gamblers want to see.

The downside is that design of Lock a Luck looks a bit simple. In terms of originality and depth of the slot, Lock a Luck does not score high points.

Players seeking for the incredible wins of say 1,000x the bet or more should also stay away from this slot.

It is an ideal slot for beginners who prefer to keep it simple and don’t like to take too much risk.

Where can you find Lock a Luck?

The Lock a Luck slot is found at all reliable Microgaming casinos. One of these casinos is Casumo, which offers a massive selection of slots and a unique theme.