It’s Time!! is a follow up of the Get Ready to Rumble slot – here it is Michaels’  half-brother Bruce Buffer with his signature slogan: “It’s Time!”.

Bruce Buffer is the half-brother of Michael Buffer. Michael is known from his world-famous boxing match catchphrase “Let’s Get Ready To Rumble!”. Bruce tries to follow his footsteps.

The same can be said with this slot. There are some subtle differences with the slot Get Ready to Rumble, though, in terms of gameplay and animations.

It’s Time!! is very cartoonish and appears somewhat childish. It’s like the main characters in this slot, have come straight away from video games played by 6 or 7-year-olds.

The game is played in (what else could it be?) the fighting ring.

Besides the main character, Bruce, we have the following four fighters:

Our friend Gonzalez doesn’t win too many matches, but must be popular with the female fans. His hair looks impeccable. 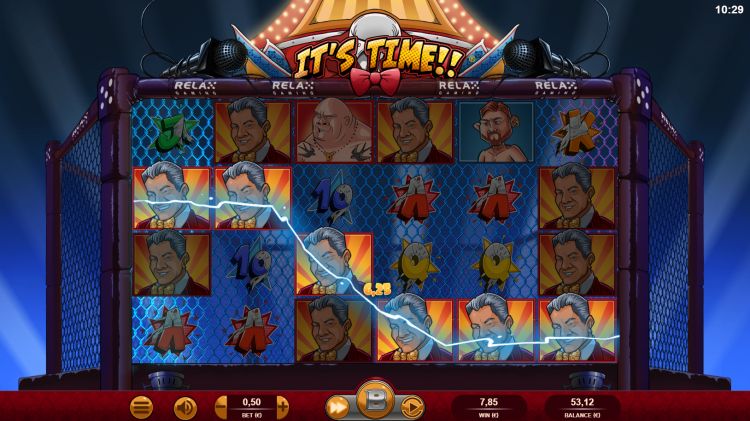 It’s Time!! has 40 paylines, divided across 6 reels with 4 rows of symbols.

What is the theoretical RTP, the variance and the maximum win of It’s time!!?

The theoretical payout percentage is an excellent 96.74%. It is undoubtedly better than the average RTP of the online slots of the more reputational providers.

The variance of It’s Time!! is medium.

The maximum win is 2,500 x the total bet, which you will win if you get a full screen of Bruce Buffer symbols in combination with the 5x multiplier.

It will be an absolute miracle if that happens, though. 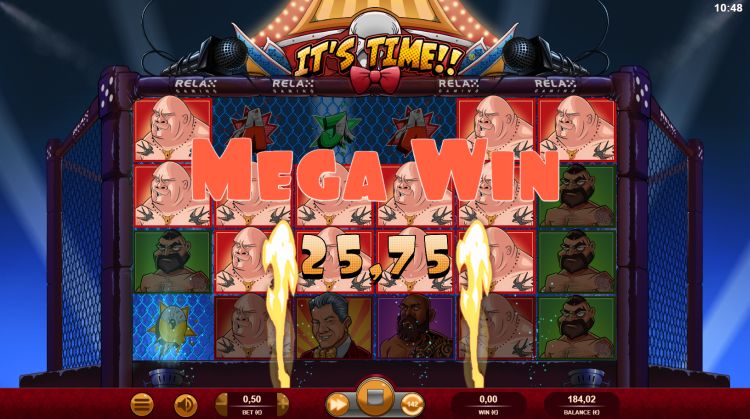 The wilds replace all symbols and are also the most valuable: 25 times the total bet for a 6-of-a-kind. Don’t expect to see these often here.

Bruce Buffer is, of course, the highest paying premium symbol. Spin 6 of them on an active payline and you win 12.5x the bet. As there are 40 paylines, you get a win of 500x the bet, if you manage to spin a full screen of Bruce’s.

The four cage fighters yield between 5x and 10x the bet for a 6-of-a-kind.

All premium symbols are stacked.

The low symbols are the card symbols 10, J, Q, K and A. These symbols are not stacked and yield a maximum of 3 x the bet. 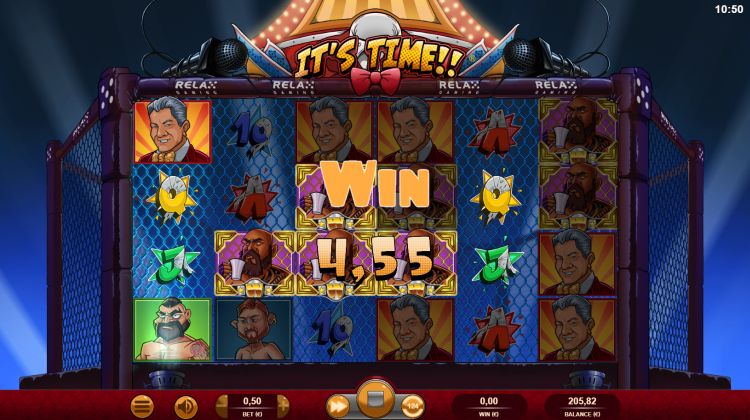 The Hot Spot Feature can appear at any time. If it does, the 4 middle symbols of the screen become a Hot Spot.

If you get four identical premium symbols in the Hot Spot, they turn into wilds. On top of that, you get one free respin. All symbols that match the Hot Spot symbols, become wilds as well. 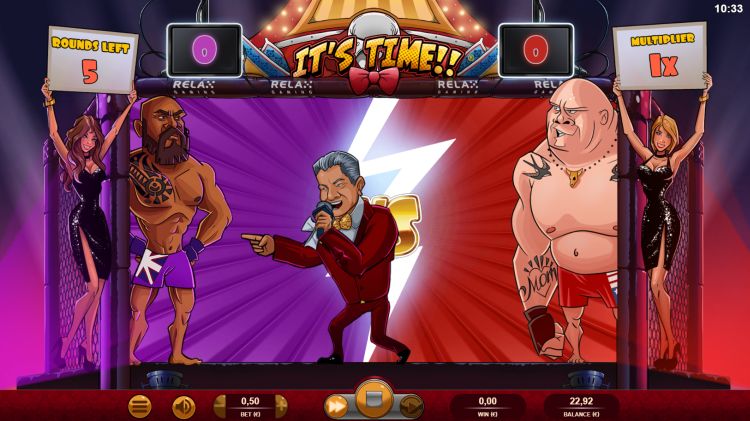 The most spectacular Bonus Feature of this slot is the Fighter Bonus.

You need to be patient, though. It usually takes a couple of hundred spins if you get is. You need stacked fighter symbols of the 1st reel and the 6th reel.

All player symbols that appear during the free spins become sticky.

After the 5th spin (round 5), it is decided which fighter has won. The boxer with the most symbols wins the fight and makes sure that all the fighter symbols of the losing fighter change into the symbol of the winning fighter.

It can be highly lucrative as long as you have sufficient fighter symbols on the middle reels.

It helps that there are all kinds of boosters during the free spins. You can get extra symbols (diagonal, right hook, left hook) or upgrades to higher symbols.

There is also a multiplier that starts with 1x and can increase up to 5x. 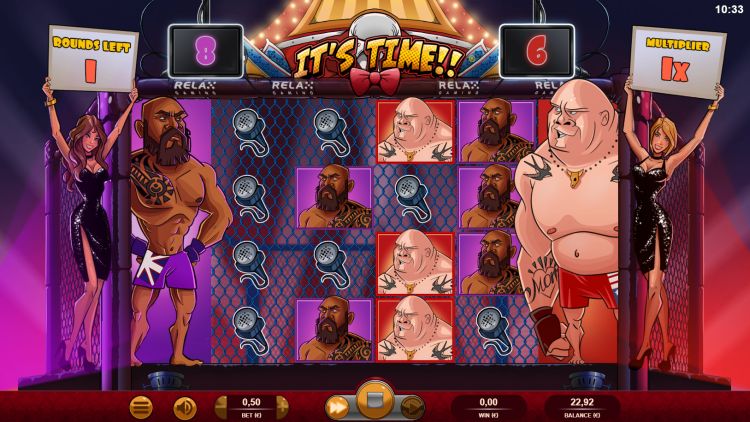 The Buffer Bonus is tough to win (even harder than the Fighter Bonus) but can be very lucrative.

If you manage to spin a stacked Bruce Buffer symbol on reels 1 and 6, these will become sticky. The good news is that you get 3 respins.

During these respins you may try to spin as many Bruce Buffer symbols as possible. Each spin, when at least one Bruce symbol appears, the counter is reset, so that you still have 3 respins left.

You can also win the same boosters as during the Fight Bonus.

Our verdict on the It’s Time!! video slot

It’s Time!! is clearly the little brother of Let’s Get Ready To Rumble, also released by Relax Gaming. The graphics and animations are not as stunning.

There are some other issues we have with this slot.

First of all: it often takes an eternity to win the Fight Bonus. Usually a couple of hundred spins. Every time there’s a big “It’s Time!!” announcement, to be followed by “Not this time!”.  Soon, it becomes annoying.

Second, if you finally win the Fight Bonus, after a long time of play, it happens too often that you win something tiny (prizes less than 20x the bet are not unusual). We can tell you that it does not feel too good.

It’s Time!! is certainly not a bad slot, but the mathematics behind the slot could have been better. There are too many prizes of say 20x to 50x the bet in the base game. The result is that the Fight Bonus or the Buffer Bonus features too challenging to get. Let alone get the real massive prizes out of these features.

Where can you find It’s Time!!?

The It’s Time!! slot is found at all reliable Relax Gaming casinos, including Casumo, which is a very reliable online casino, with a massive selection of slots.