Every Amatic’s slots fan knows the Casanova slot: the slot about the famous womanizer who was on the prowl in Venice.

Amatic thought it was a good idea to release a sequel to the Casanova video slot: Grand Casanova.

The changes compared to the original are minimal: the game mechanism is kept intact, the symbols are the same, and the theme is identical.

So what has changed with Grand Casanova? For one, it looks much better than the first edition.

Where many older Amatic slots stand out due to their bit clumsy, coarse graphics, Grand Casanova looks good, with beautifully designed symbols and sleek animations.

It’s still not on the level of, let’s say, Netent or Quickspin, but at least it’s a step in the right direction. 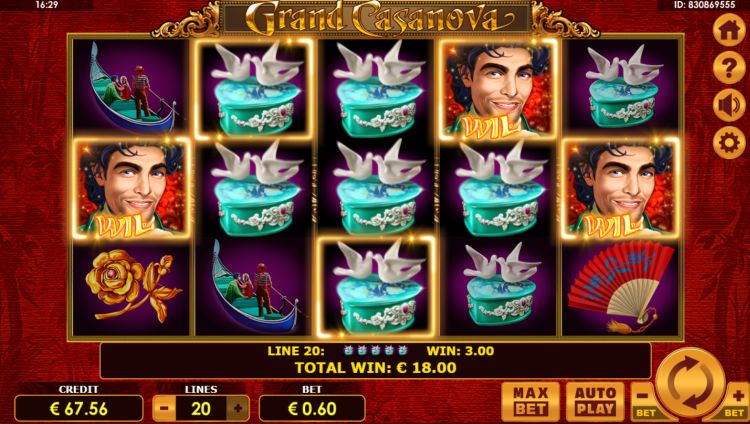 Grand Casanova has 5 reels with 3 rows of symbols, and as a player, you have the choice to play with either 10 or 20 paylines.

We estimate the variance to be medium: you can win a maximum of 1,000 x your total bet. You do have to spin a full screen of wild symbols in the free spins bonus to pull that off.

The payout rate of Grand Casanova is secret. It remains a mortal sin that a major provider like Amatic protects the Return to Player percentages of their slots. To us, it seems a bit odd; transparency and trust go hand in hand. We are not talking about Coca Cola’s secret recipe.

We find it frustrating enough that the payout percentage of land-based casino slot machines is mostly unclear. But with an online slot, we expect to be able to find the RTP in the game rules. 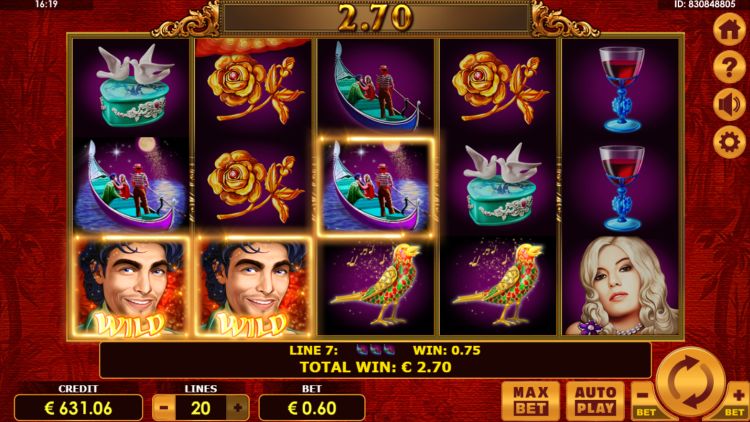 The romantic theme of Grand Casanova can be found in the symbols: lots of love, beautiful ladies and Venice.

Casanova itself, winking as to be expected, is the wild symbol and replaces all other symbols except the scatters. Five wilds on an active payline net you 50 x the total bet, with all 20 paylines active.

The medium symbols consist of three handsome ladies, amongst symbols such as gondolas, cupids, hand fans and glasses of red wine. 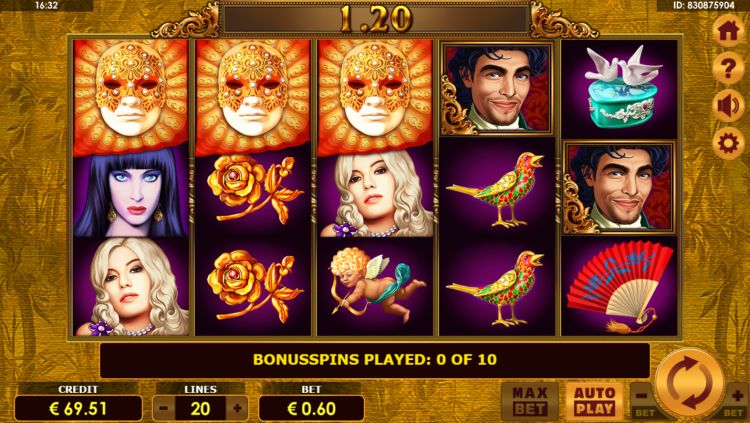 The beautiful golden masks are the scatter symbols in the game.

During the free spins, every wild expands over the entire reel.

So it’s crucial to spin a lot of Casanova’s during the free spins. If you manage to do that, chances are you’ll be able to cash out a good amount of money.

What if Casanova doesn’t show up during the bonus round? Then things will get complicated.

You can unlimitedly retrigger the free spins.

Our verdict on the Grand Casanova video slot

Grand Casanova is mainly an improved version of the original Casanova.

Luckily for Amatic, we already were quite fond of that slot, so it is likely we can appreciate Grand Casanova as well; and we do!

Still, it is a pity Amatic did not put in just a little more effort to add some new bonus features.

Now it is more of the same.

Where can you find Grand Casanova?

The Grand Casanova slot is found at all reliable Amatic casinos. One of these Amatic casinos is Slots Million, which is a very reliable online casino, with a massive selection of slots.