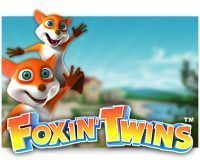 For years, the Foxin’ Wins and Foxin’ Wins Again slots by Nextgen have always been immensely popular titles.

It is time for a new title in the series: Foxin’ Twins.

Foxin’ Twins is Nextgen’s latest addition to the Foxin’ Wins franchise. And in the spirit of the first two extensively played slots, Foxin’ Twins comes with a lot of bonus features, hysterical foxes and low variance.

And of course, let’s not forget the Super Bet option: extra betting options that bring forth more bonus features and a higher payout rate if you bet extra. 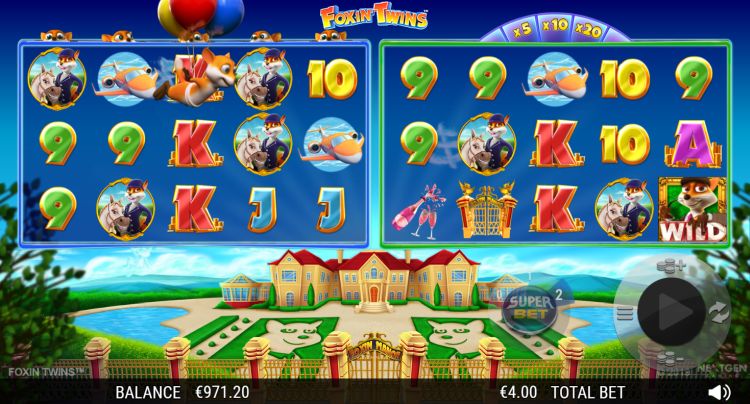 As the title of the slot already suggests, you play Foxin’ Twins on a double set of reels.

Both sets have five reels with three rows of symbols and 25 fixed paylines. You play with a fixed amount per spin, which effectively awards you 50 paylines for your money.

The minimum bet is $€ 0.25 per spin, and you can play with up to $€ 25 per spin. That maximum bet is based on the maximum stake combined with the highest Super Bet level.

The theoretical payout rate depends on whether you play with an activated Super Bet and, if so, which level you are at.

In other words, this is a slot that rewards you more when you bet more, but there are plenty of better-paying slots if you want to bet at lower levels.

What’s the function of the Super Bet?

The Super Bet makes sure wild bonus features hit the reels more often, and your wins are multiplied:

The Foxin’ Twins, the main characters of this slot, are two super-rich twin brothers. They live in a large manor, and nothing tops their love for cash.

Both foxes are wild and replace all other symbols, except the scatters — five wilds on an active payline yield you 500 coins.

Moreover, random wilds can drop on the reels. The higher the Super Bet, the more frequently this happens.

The high-value symbols consist of a thoroughbred racehorse, a private jet, the gate of their manor and champagne glasses. These symbols award you 50 to 250 coins for every 5-of-a-kind on an active payline. 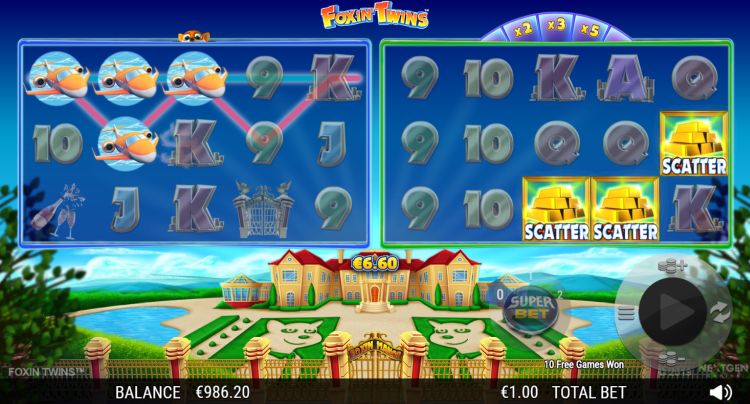 If you manage to spin 3 or more scatters, then you will win the free spins bonus. The scatters can also be spread over both sets of reels. Depending on the number of scatters, you will earn a minimum of 10 up to a maximum of 100 free spins.

During the free spins, a few bonus boosters are active:

It is possible to retrigger the free spins by spinning 3 or more scatters again. 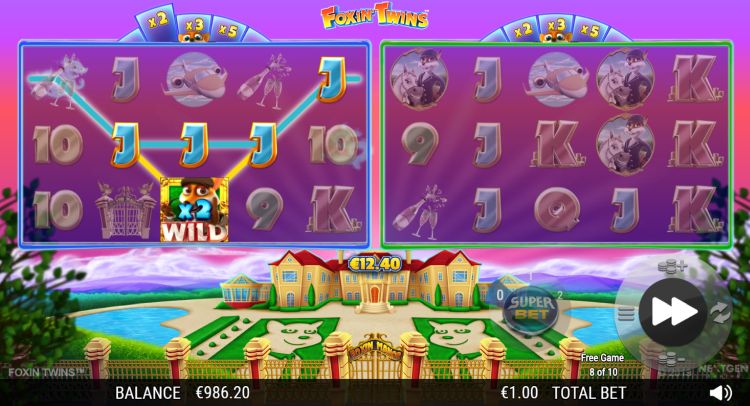 Our verdict on the Foxin’ Twins slot

We’ve never been big fans of Foxin’ Wins, or Foxin’ Wins Again. Too busy, too hysterical and far too low potential.

But to be fair, those are video slots with an enormous fan base.

So it’s a no-brainer that Nextgen is releasing a new version. In that respect, demand often determines the supply.

All ingredients for a smashing success are present in Foxin’ Twins, so there’s a good chance that this video slot turns out to be another blockbuster.

Where can you find Foxin’ Twins?