Eye of the Kraken

Eye of the Kraken Features

Eye of the Kraken Information 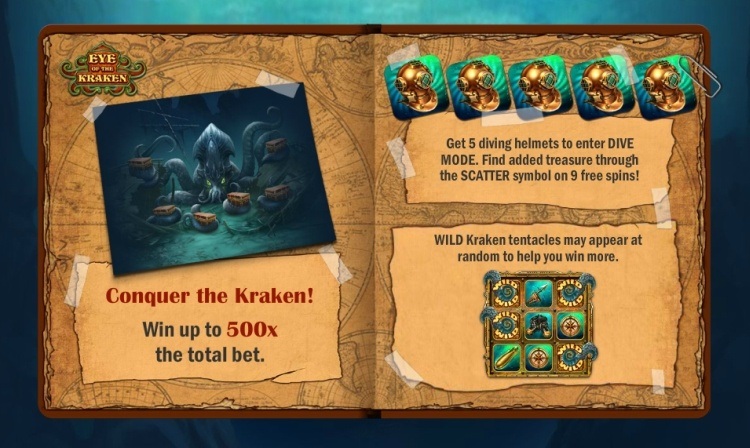 In Play’n Go’s popular Eye of the Kraken video slot, deep-sea divers go in search of the mythical octopus The Kraken.

With all its tentacles, this octopus guards the treasures hidden at the bottom of the cold and dark ocean.

Are you able to snatch the treasures from under The Kraken’s nose? Or does The Kraken outsmart you, and will you get caught in its huge tentacles?

Eye of the Kraken has an excellent theoretical payout rate of 96.41% – perfectly fine. The variance is low: you win a lot of small prizes, and the bonus features often drop. The decent payout rate and low variance make this slot very suitable to unlock a welcome bonus.

Do make sure you have sufficient funds (at least 100 x up to 150 x your bet per spin) because one of the bonus features is one you have to save up for. In other words, you’ll get it, but don’t know precisely when.

Eye of the Kraken gameplay & features

Legend has it; the Kraken was a giant sea monster living in the dark coastal waters near Greenland and Norway. This monster’s tentacles were up to 20 meters long – enough to make even the most hardened sailor weak at the knees.

Eye of the Kraken’s animations are beautifully executed – think typical 1950s horror movies. The symbols consist of diving gear such as flippers, a compass and diving suits. The sound effects perfectly match the atmosphere and make everything feel a little more claustrophobic.

The playing field consists of a 3 x 3 matrix of symbols with 8 fixed paylines. You pay a fixed amount per spin, starting at $€ 0.20 and running up to a maximum of $€ 10. This slot isn’t for the high roller, who likes to bet tens of dollars per spin.

Eye of the Kraken offers many different ways to win prizes. Obviously, three identical symbols on a payline award you a price, but there are also scatter payouts, and payouts resulting from combinations of certain symbols.

As mentioned before, this is a very low variance slot, as reflected in the payout table of winning combinations. 3 Wild symbols or three torpedoes (the highest paying symbol) award you a mere 20 x your bet. If you hit three tough-looking captains, you make 10 x your bet, and the three lowest value symbols don’t even pay back your bet.

If you want to make a killing, you’ll have to activate the bonus rounds. How that is done, we’ll disclose below.

Eye of the Kraken Bonus Features

Eye of the Kraken has three different bonus features. All of them are entertaining bonuses that drop frequently. This video slot continually keeps you engaged, avoiding boredom.

The Wild Kraken bonus can drop at any time. The Kraken will appear on the screen, spreading its enormous tentacles and leaving Wild symbols behind on the grid. The more Wilds, the higher the win, of course.

The Conquer the Kraken! Bonus

This bonus requires some effort on your side – it’s a savings bonus. Once you have collected 50 torpedoes, the bonus initiates. It’s a pick-em bonus, allowing you to open treasure chests with the torpedoes you saved up. You are awarded three attempts to open the treasure chests that contain the cash prizes. This lucrative bonus feature can land you up to 500 x your bet.

If five or more dive helmet symbols appear on the screen, the Dive Mode is activated. You now pick up 9 free spins, with an additional Wild symbol added to the game. You also have the chance to win extra cash prizes. 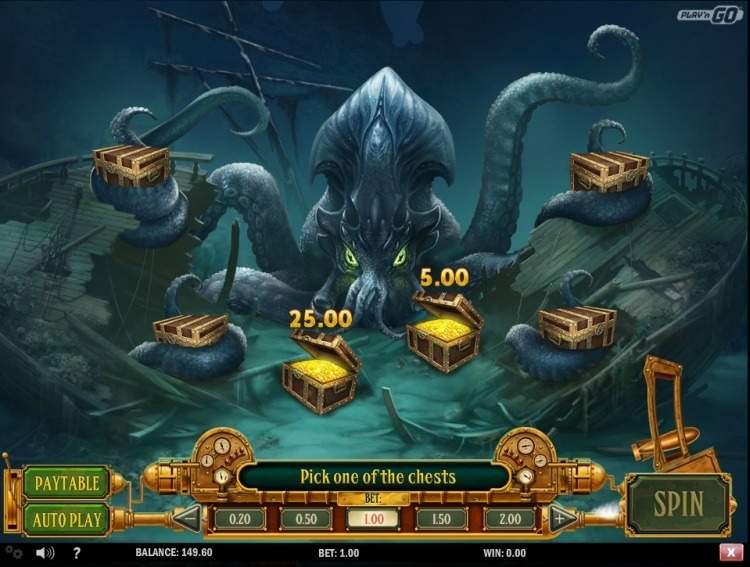 Our verdict on the Eye of the Kraken slot

Play’n GO has transformed a legend into a stunning video slot. It’s a beautifully designed and atmospheric slot with a great storyline and three juicy bonuses.

Despite its low variance, we love playing the Eye of the Kraken slot.

This slot has more than enough in store to keep you entertained and/or unlock a casino bonus.

Where can you find Eye of the Kraken?

The Eye of the Kraken slot is found at all reliable Play’n GO casinos. One of these casinos is Slots Million, a very reputable online casino with a massive selection of slots.