Thunderkick proves that even the most quirky and self-willed slot provider can’t escape making sequels to successful slots.

The original Esqueleto Explosivo was one of their first releases and was strange, funny and unique. It was an instant introduction to the online casino world with everything Thunderkick stands for: they tackle things a little differently.

The sequel, with the particularly striking name Esqueleto Explosivo 2, is, to some extent, the same as the original but beats the first part in several ways.

The variance has been dramatically increased (a trend we see with other providers too), and a free spins bonus has been added. Besides that, the golden Elvis wilds have remained (fortunately), but they don’t blow away all symbols anymore: now, the highest value symbols remain on the reels. Finally, during the free spins bonus, you can earn a multiplier of x 64, which is a significant extra motivation to play this slot.

This sequel provides a lot of extra depth, and exactly depth was what the original Esqueleto Explosivo missed a bit. 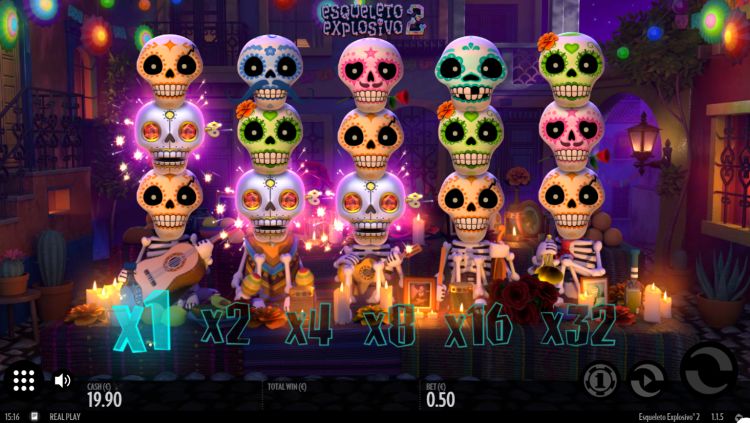 The setup of Esqueleto Explosivo 2 will look familiar to most players. The setting is the square of a festive Mexican village, where the day of the dead is celebrated. In the village square, a mariachi band of skeletons plays.

There are 5 reels with 3 rows of symbols and 99 ways to win. Winning combinations disappear and make way for new ones.

The variance of Esqueleto Explosivo 2 is high: you can win  5,000 x the total bet tops. That is already a big contrast to the original, which was mainly a low variance slot.

With 96.13%, the theoretical payout rate is nicely on par. 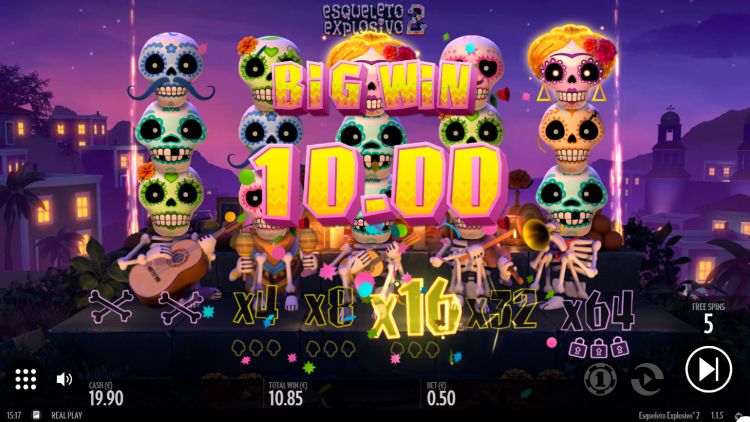 Many of the symbols used will give you a deja vu experience. Most of the skulls have remained, and some new ones have been added.

The golden Elvis is not only super cool but also wild. He also blows up all the symbols (except the scatters and the highest symbols) around him, which is very handy to save you from challenging situations when you’re about to get stuck.

The highest value symbol is the female skull, recognizable by her beautiful earrings. Spin 5 the same for a payout of 5 x the total bet. And that’s without any multipliers. 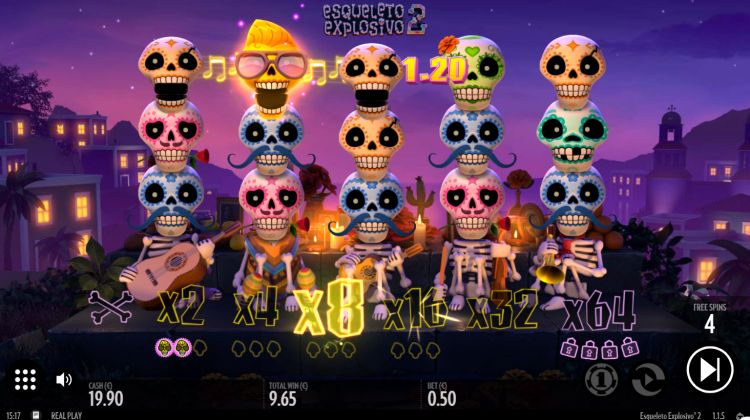 The goal of this bonus feature is to unlock the multiplier of x 64 finally.

You do this in steps, by filling the meters at the bottom of the screen by spinning wilds. When a meter is full, you win +1 free spin, and the corresponding multiplier will be locked in as it were.

For example, if you have filled the x 4 meter, then all payouts that come afterwards are worth x 8.

Did you reach the highest multiplier of x 64? Then you know every winning combination results in a big payout. 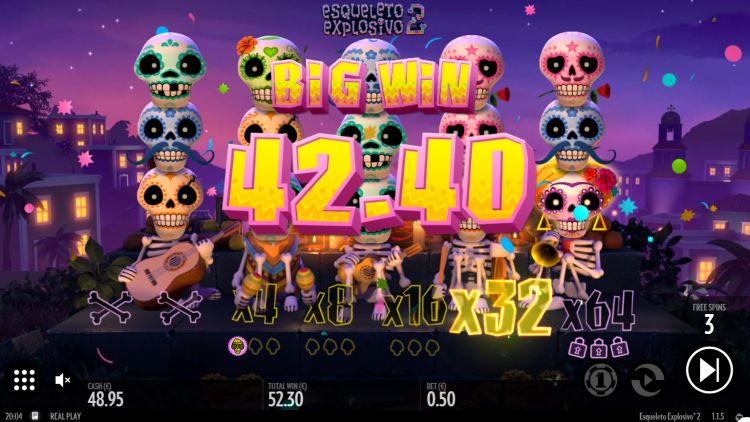 Our verdict on Esqueleto Explosivo 2?

It’s not Thunderkick’s nature to make sequels of their slots. That’s more for big, lazy providers like Netent and Microgaming, who value originality less.

Also, the wonderfully crazy Mexican Mariachi Band atmosphere with our beloved skeletons has made it to the sequel.

Where can you find Esqueleto Explosivo 2?