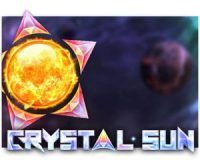 Play ‘n GO has already proven in the past that they have no problem with copying well-known slots from other providers.

Examples of Play ‘n GO clones that come to mind are of course Book of Dead (Book of Ra clone) and Sails of Gold (a Columbus clone).

But up until now, they did not have a Starburst clone. Only a few weeks ago Netent had successfully blocked the release of Starblast because it resembled Starburst too closely. The threat of a lawsuit by Netent was enough for Play ‘n GO to park Starblast temporarily.

And then suddenly Play ‘n GO comes out with Crystal Sun. And this does look remarkably close like a Starburst clone, albeit with a seriously increased variance and some added features, such as extra multipliers.

What did stay the same are the expanding wilds on the middle reels, the paylines on both sides, the space theme and the respins.

So it turns out that Crystal Sun is really just Starblast, but with a different name and some slightly disparate graphics.

And no court will now say that this is pinched from a competitor. Most probably it wouldn’t go beyond “inspired by”.

That NetEntertainment is not going to be very happy about this seems obvious. 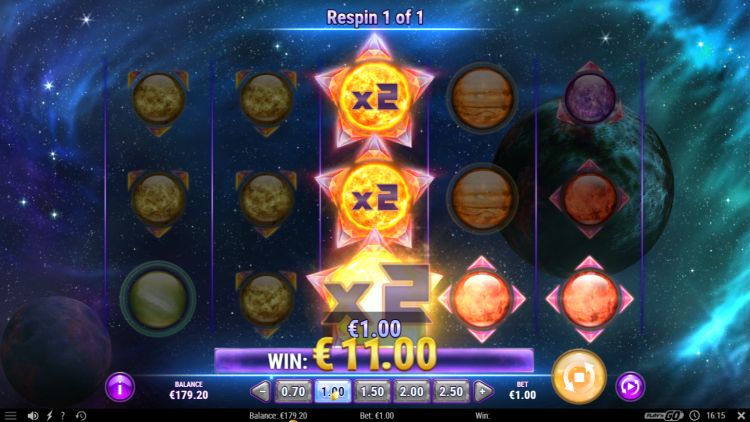 How does Crystal Sun work?

Crystal Sun is a slot with a straightforward setup. There are 5 reels with 3 rows of symbols, and you only have 10 paylines. Payouts are possible from both sides: from left to right and from right to left.

As far as variance goes is the Crystal Sun on the robust side: somewhere between medium and high. The maximum payout is no less than 4,000 x the total bet, and that has everything to do with the expanding wilds, the respins and the extra multipliers.

The theoretical payout rate is great, at 96.6%. 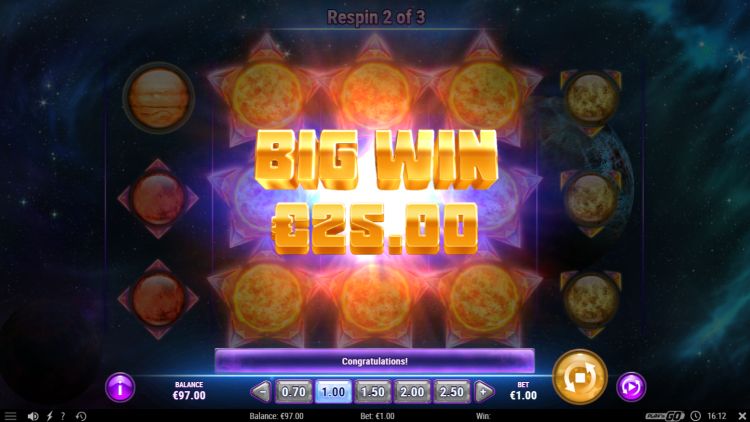 Wilds replace all other symbols but only occur on the middle reels.

Also, all symbols in the game are stacked. So it is entirely possible to create an entire screen filled with the same symbol.

The highest paying symbol is the diamond. Every 5-of-a-kind of this symbol earns you 16 x the total bet. A full screen of diamonds is worth 10 x 16 = 160 x the total bet.

Second in the hierarchy is the red seven, good for 8 x the total bet with 5 identical ones on an active payline.

Medium value symbols consist of 5 different coloured gemstones. These have a value of between 2 x and 4 x the total bet for every 5 identical ones.

As soon as a wild symbol lands on one of the middle reels, it expands over the entire reel.

On top of that, you get a free respin, wherein all the wilds remain in place.

If another wild drops, the process repeats itself, up to a maximum of 3 respins.

Does this sound familiar? 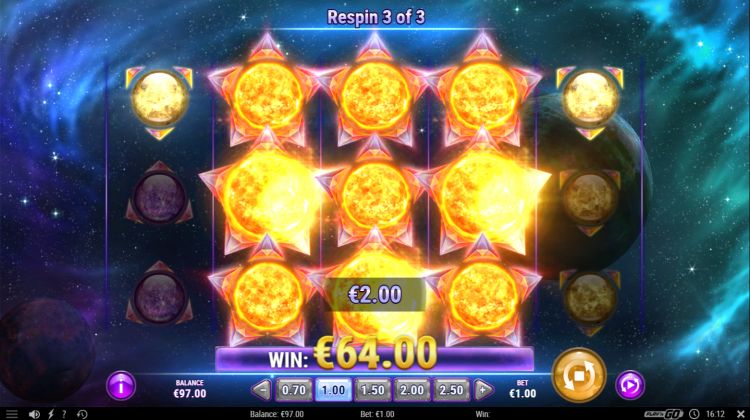 And then now we have arrived at the “unique” part of this Starburst clone: the wilds can contain multipliers. And we can tell you that this makes Crystal Sun a whole lot more enjoyable than the original.

The maximum total multiplier that can occur is 9 x. To get there, you have to be able to spin a 3 x multiplier on every wild reel.

And if you have done that, for your next trick you need to make a high-value symbol appear on both sides of the screen, a diamond or a red 7.

Our verdict on the Crystal Sun video slot

Play ‘n GO is capable of creating the most beautiful and original slots. Think for example of Reactoonz or Moon Princess.

In comparison, this Crystal Sun lacks some flavour and pizzazz.

Having said all that, we can confide in you that we secretly really enjoy this online slot, because it is fun. We usually like games that have a little more depth to them but as a bit of filler, you know an inbetweenie, this Crystal Sun is just perfect.

It will be interesting to see if the fans of the Starburst slot are going to embrace this slot or largely ignore it.

It would not surprise us at all if Play ‘n GO with this Crystal Sun will be eroding another piece of the Netent empire.

Where can you find Crystal Sun?