The dangerous Kraken (the mythical mega squid) lurks in the deep ocean guarding its riches and waiting to grab you and your ship. It is up to you to try and get away with its treasures.

SuperBigWin has always been a big fan of Thunderkick, simply because they were always original and never opted for the easy (copycat or rehash) solution.

However, they seem to have lost that creativity and sparkle a bit: for instance, they released (the very enjoyable) Esqueleto Explosivo 2, but no more than a sequel.

Beat The Beast: Kraken’s Lair isn’t brimming with originality either: it is an almost 100% clone of The Falcon Huntress, which in turn was heavily inspired by Book of Ra… are you still with us?

To round it all off; after Play’n GO (Eye of The Kraken) and Pragmatic Play (Release of the Kraken), Thunderkick now also hops on the Kraken bandwagon.

So don’t get your hopes up too much by expecting anything you’ve never seen before.

Fortunately, with Kraken’s Lair, the whole game experience is very tasty. If you like squid, that is. 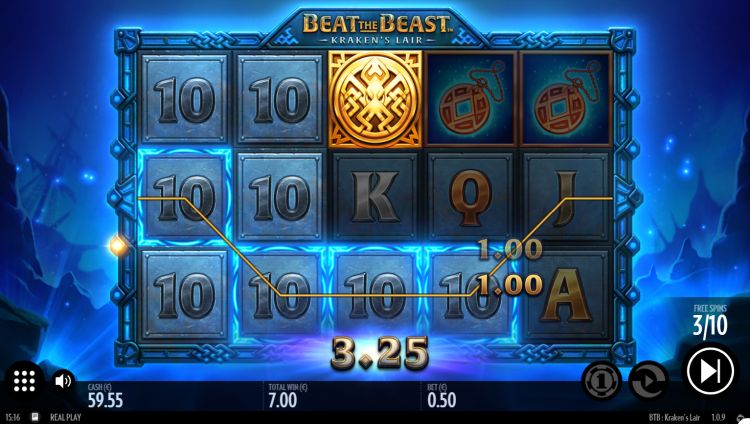 The payout rate of Beat the Beast: Kraken’s Lair is 96.12%, which is pretty ok, but of course not spectacular. Another one of those traits we can’t appreciate: Thunderkick is lowering and lowering the RTP of their slots little by little over the years.

The times when Thunderkick slots returned 97% or 98% to the player lie far behind us.

The maximum win is 7,777x the total bet: if you believe in lucky numbers, well here you are. Is it possible to land such an enormous win? In theory, it is, but wins of say 1,000x to 2,000x the bet are the typical top prizes to expect here.

Thunderkick is really into releasing volatile slots lately. Their latest 2019 releases of Sword of Khans, Divine Lotus and Riders of the Storm were all high variance slots. And now they seem to continue to make volatile slots in 2020, with this beast.

Kraken’s Lair has 5 reels with 3 rows of symbols and 9 fixed paylines.

Then again, the variance is high: with this online video slot, you have to take volatile gameplay into account.

SuperBigWin tip: Are you in the money early on by hitting a few (very) profitable spins? Then consider the hit-and-run strategy. Grab and go! 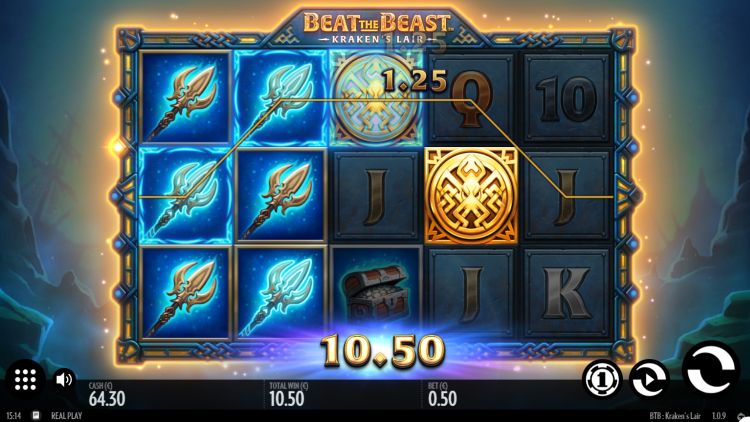 The Kraken (the purple giant squid) is the highest paying symbol. A 5-of-a-kind of this whopper of a beast yields no less than 500 x the total bet. Did you spin a screen full of Krakens? Then you are banking 9 x 500 = 4,500 x the bet.

The medium value symbols consist of a golden squid, a treasure chest, a golden amulet and a trident. These symbols are worth between 25 x and 50 x the total bet for a 5-of-a-kid on an active payline.

Wilds play an essential role in this game. Not only do they act as scatter symbols (which activate the bonus), but they also cause symbols to expand.

This works as follows: every winning combination with a wild present expands. For example, if you have a 5-of-a-kind with a wild symbol, all these symbols expand, and you have 9 x 5 of the same symbols; those are lucrative numbers!

No multipliers are active during the free spins. You do get one wild scatter on the reels every turn.

This extra scatter increases your chances of:

The free spins bonus is very volatile: sometimes you barely win, and other times, you can just as easily top up your account a few hundred (or more!) times the bet. 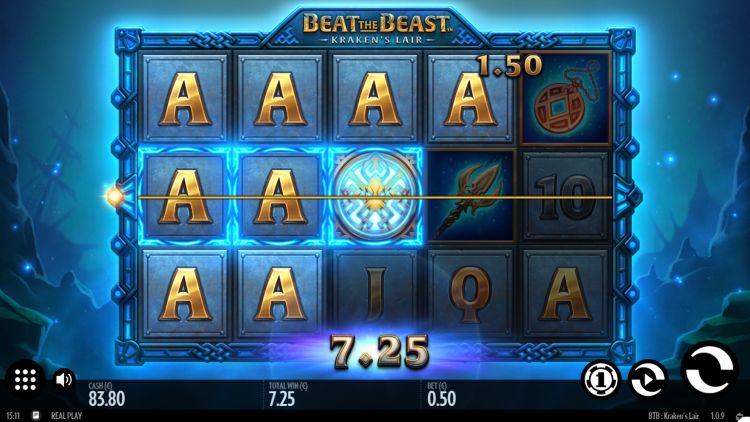 Our verdict on the Beat The Beast: Kraken’s Lair?

Beat The Beast: Kraken’s Lair doesn’t win the prize for originality, but it’s very enjoyable. And the Kraken genre is cracking on!

The beautifully elaborated theme, and the high-quality production standards, for which Thunderkick is known, presents us with a good, but not a great online slot.

Kraken’s Lair won’t make it into our top 10 Thunderkick slot list, but it’s certainly worth a try.

Where can you find Beat The Beast: Kraken’s Lair?