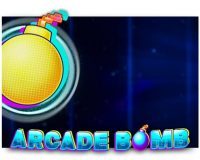 The fruit machine as we know it, however with an explosive twist. This online slot machine is both fruity and very colourful. It lures you with an outer space setting and groovy background music.

This classic is by no means ordinary. It doesn’t have any Wild symbols or Scatter symbols, for instance. Still, this slot can set off the fireworks. Want to know how? Read on then.

Arcade Bomb has a rather moderate payout rate of 95% and an average variance. The game has a fun, unique feature to look forward to. Arcade Bomb doesn’t have free spins, but it does come with Reel Bombs in 4 bright colours. All adjacent symbols on the reels from left to right and from right to left can also award you nicely. 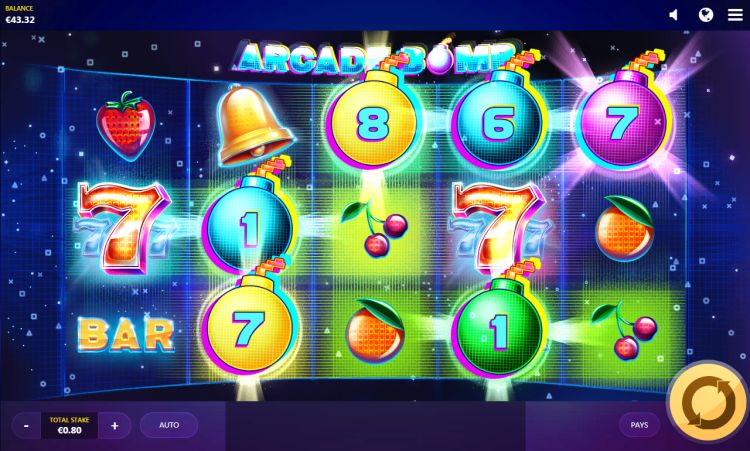 How does the Arcade Bomb slot work?

While you will receive minimal payouts in the primary game, expect to be blown away by the combination of Reel Bombs. As the reels can be packed with the Reel Bombs, this can lead to rather attractive payouts.

These are the symbols in the game: the bell, bar, melon, strawberry, orange, lemon and cherry. The fruit symbols are the least profitable: 5 identical symbols award you 0.25 x to 2.5 x your bet. The bar yields 6.25 x your bet, and the bell 12.5 x your bet in case of a 5-of-a-kind.

Moreover, there is number 7 which pays out pretty well. Three of the same symbols yields you 5 x the bet; 4 identical symbols get you 12.5 x your bet, and a 5-of-a-kind is worth 50 x your stake. Bring them on, these sevens!

However, I do miss that special gaming experience a little, at which Red Tiger Gaming usually excels. Some mystery features would have helped. 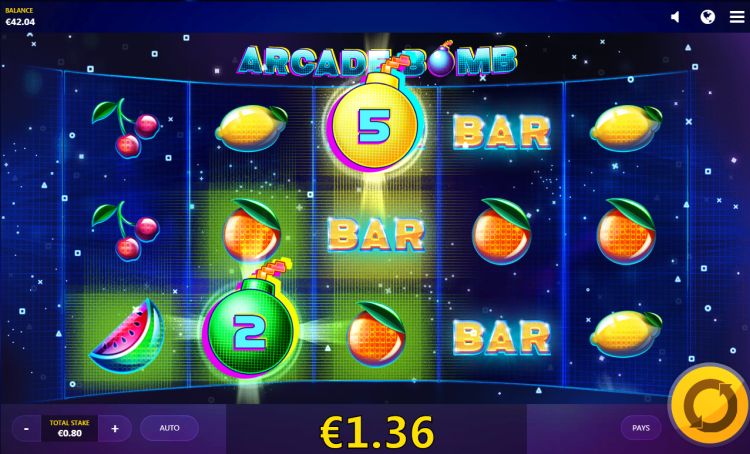 Arcade Bomb doesn’t have any bonus rounds, but its Reel Bombs can also award you high payouts!

During the game, bombs will stick to the reels. All of the Reel Bombs have a number that counts down with every spin. The Reel Bomb will stay in place during the countdown, while the rest of the symbols continue to spin. As soon as the bomb reaches 0, it explodes.

There are four different colours of bombs. Each colour explodes in a different direction. The explosion blasts identical symbols onto the rows, creating winning combinations.

It’s possible that several bombs attach to the reels. Except for the countdown to 0, the bombs can also set off each other if they explode in each other’s direction. Combine multiple bombs and watch even more identical symbols appear on the reels. The more, the merrier! 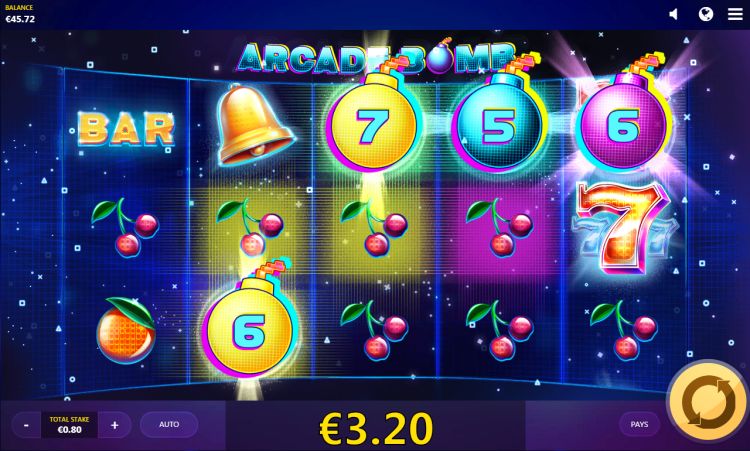 Our verdict on the Arcade Bomb slot

While the slot machine Arcade Bomb doesn’t come with the features you might expect from Red Tiger Gaming; the potential chain reactions are this slot’s main attraction. As long as you have enough consecutive explosions, you can receive pretty nice payouts, which certainly makes the Reel Bombs feature an interesting one. If you don’t hit any chain reactions, however, it’s a rather dull slot. Less is more doesn’t apply in this case if you ask me.

I would play this one again, just for the sake of variety, but it certainly isn’t a big hit.

Where can you find Arcade Bomb?