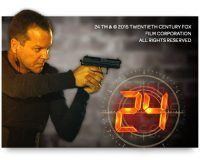 This time, they use award-winning U.S. TV series 24 as their theme. From 2001 to 2010, there was such a hype around the 24 action series that dolls, books, t-shirts and games were launched.

The series was unique back then because it was set in “real time”. Each episode lasts precisely 60 minutes, 24 episodes form 1 season of 24 hours.

Now iSoftbet takes up the challenge to transform the immensely popular series into a video slot. Like the series, Jack Bauer is the lead character in the game, trying to prevent terrorist attacks. Real 24 fans will appreciate this video slot because it features all the key elements of the series. For example, Jack Bauer will drop on the reels, and the game is full of bombs and gun violence.

The exhilarating background music and the quotes from the series we regularly hear elevates this video slot and makes it stand out from the crowd.

The iSoftbet developers have succeeded in creating an action-packed video slot that does justice to the 24 series. Besides a good theme, of course, it is also essential to know whether the game rewards you handsomely with attractive prizes.

For a full 24 hours, we have looked into it for you. 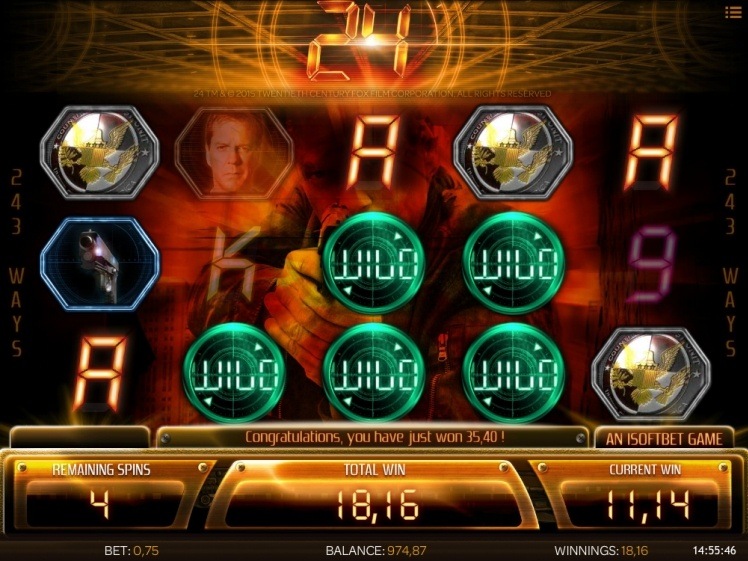 How does the 24 video slot work?

You play the 24 video slot on 5 reels and 3 rows of symbols related to the thrilling action series. Because the game uses the win all ways mechanism, symbols do not necessarily have to hit specific reels to win prizes, as long as they drop on the reels successively.

The theoretical payout rate of the 24 video slot is 96.07%. Furthermore, we estimate the variance of the game to be medium. 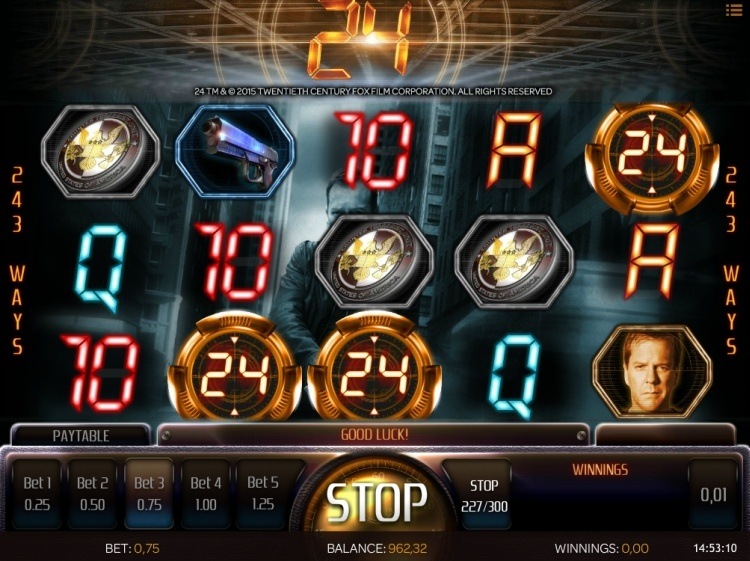 The creators of the 24 video slot succeed brilliantly -manage to in building up suspense in the primary game [already]through thrilling background music and quotes from the film you continuously hear.

The two nerve-racking bonus features of the game fuel up the thrill and fun even more.

The extra Wild symbols will occur as follows:

The Free Spins Bonus can land you a considerable prize. If you manage to spin five identical high-value symbols during this bonus game, you might take home massive profits.

As is the case in the action series, this slot is about your capability to disable the bomb. Every wire you cut can cause the countdown to start ticking. The bonus game ends as soon as the countdown timer reaches 0.

In the meantime, you have to collect as many prizes as possible. This can amount to 100 x your coin bet, and you can also win multipliers up to 10 x.

During the Bonus Round Feature, it is possible to win a staggering 1,000 x your total bet!

Our verdict of the 24 video slot

With the 24 video slot, iSoftbet has added an exciting action game to their assortment that genuinely gets you on the edge of your seat. The captivating background music nicely complements the beautifully designed game.

The film quotes that regularly pass by complete the 24 experience. Real 24 fans will genuinely love this video slot. But even if you’ve never seen the action series before, this game will whet your appetite for it.

The only major drawback is the high minimum bet of $€ 1.25 per spin.

Activating the Free Spins Feature and Bonus Round Feature makes for more lucrative profits. There are plenty of reasons to give this video slot a try.