What are the best-paying Megaways slots? 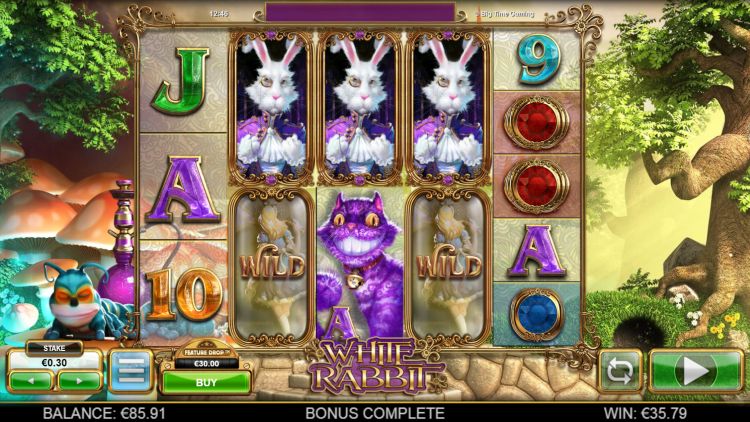 Blueprint Gaming is now the biggest producer of Megaways slots, but providers like Red Tiger Gaming, Stakelogic have also released quite a few Megaways slots. Not to mention providers as Bally, Relax Gaming, WMS, Iron Dog and many more.

Which Megaways slots have the highest RTP, and which ones the lowest?

What’s interesting is the enormous differences we see in the Return to Player (RTP) of Megaways slots. Some have high RTP’s above 96.5%, but some have an RTP well below 96% and some even an RTP of a pitiful 95%.

Let us find out!

Below the top 20 slots of an excellent (or high) RTP. We have looked at all Megaways slots up to (and including) 2019.

The good news is, that there are plenty of Megaways slots out there with an RTP of 96.5% or higher.

Also interesting to see is that the Top 3 on this list are all Big Time Gaming slots (White Rabbit Megaways, Queen of Riches Megaways and Starquest Megaways). 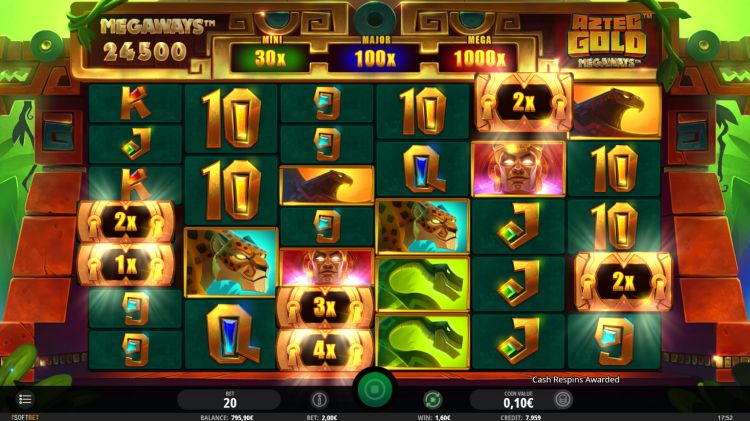 The 20 Megaways slots with the lowest RTP

Even though several Megaways slots have a great RTP, there are some stinkers out there, which you need to avoid.

Below the list with slots with the worst RTP.

There are 13 slots out there with an RTP below the 96% mark.

Also interesting: Golden Leprechaun MegaWays, Dragons Fire Megaways and Dragons Luck Megaways are all Red Tiger Gaming slots. Red Tiger is when it comes to the RTP’s, not the most generous provider (and that’s an understatement).

Why a higher RTP matters

You can argue that the 1% difference is not so significant. But it does matter — more than you think.

You can see that the difference is already more substantial. And it becomes larger and larger, once you start to wager higher amounts.

The RTP has nothing to do with the volatility (or variance) of the slot. Variance says something about the variation of the sizes of wins.

How about the 2020 Megaways slots?

The start has been spectacular as many more Megaways slots have been released in the first 2-3 months of 2020. Below, the list of what we have seen up to now.

The more than good news for Megaways lovers: Buffalo Rising All Action Megaways (of Blueprint Gaming) has an RTP of 97.01%.

At the same time, there are also Megaways slots you should avoid. Piggy Riches Megaways has an RTP of a low 95.71% and Wish upon a Jackpot Megaways an RTP of a mere 95.5%. Again, why should you consider playing these slots, if there are better alternatives?

How do the payout rates of Megaways slots compare to “normal” online slots?

You see that about half of the Megaways slots (the red coloured dots) have an RTP above the green coloured line, the average RTP of the slots, which is around 96.25%. 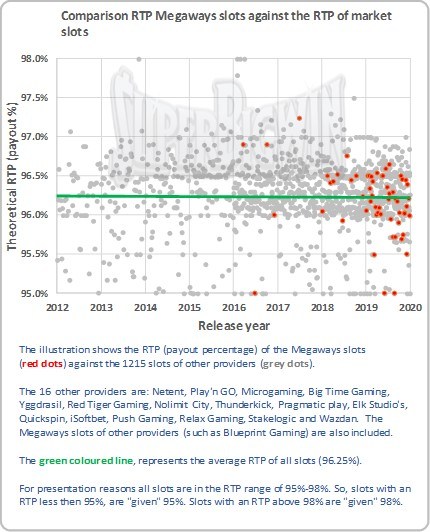 Conclusion: some Megaways slots have an outstanding RTP, but there are some stinkers out there

We conclude that some Megaways slots have an excellent RTP, above the 96.5% mark.

Unfortunately, there are enough Megaways slots with poor RTP’s.

Look for Megaways slots at these online casinos

If you are looking for Megaways slots, you can check out the online casinos in our list below.

All of these online casinos offer you the chance to play real money casino games or to play with practice money.