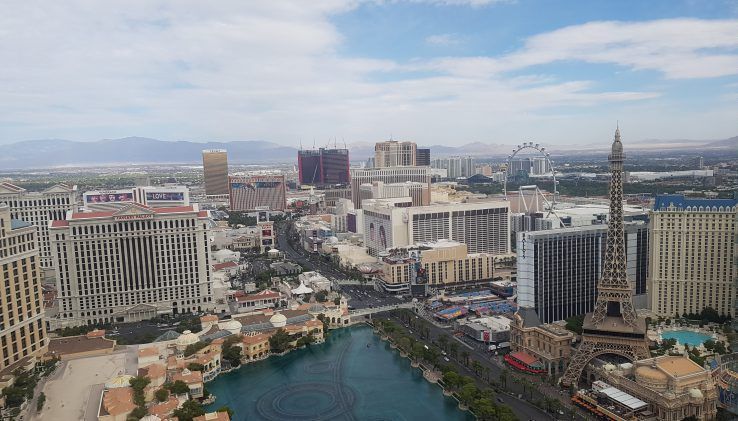 Anyone who has ever planned a Las Vegas trip knows how difficult it is to choose the perfect hotel for your needs.

Nowhere else in the world can you sleep for relatively little money in such beautiful hotels as in wonderful Sin City.

That’s why we’ve put together a top 10 of the swankiest Las Vegas hotels. Most of them are on the famous strip, but there are also some gems to be found Off-Strip and in Downtown Las Vegas.

Of course, it is also true in Vegas that there is a price tag attached to everything, and that also goes for quality. As an indication, we have rated how pricey the hotel is compared to other hotels in Las Vegas. A common mistake of Las Vegas (newbie) visitors is to try to spend the night as cheaply as possible, which often results in staying in a mediocre hotel in a poor location.

Why not indulge yourself to the max and choose a top-notch hotel in Las Vegas? 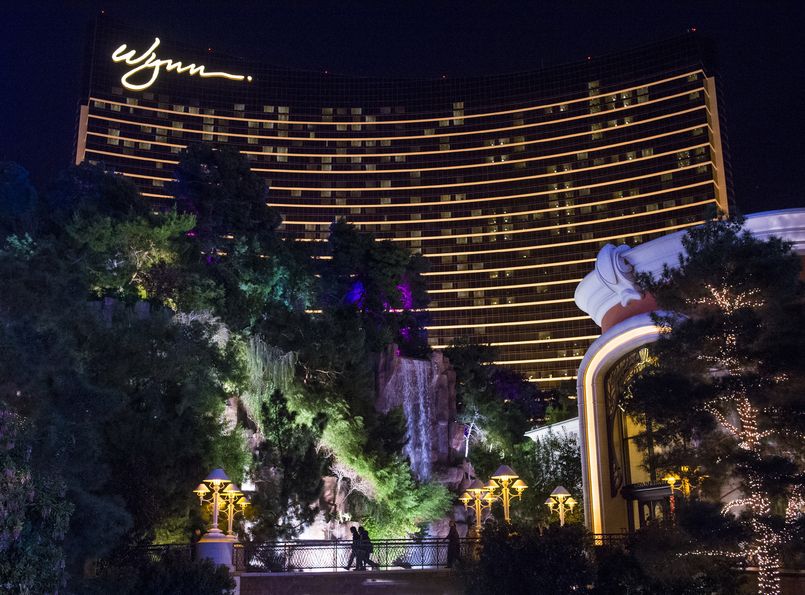 Good to know: strollers are barred from the hotel unless you are a guest. 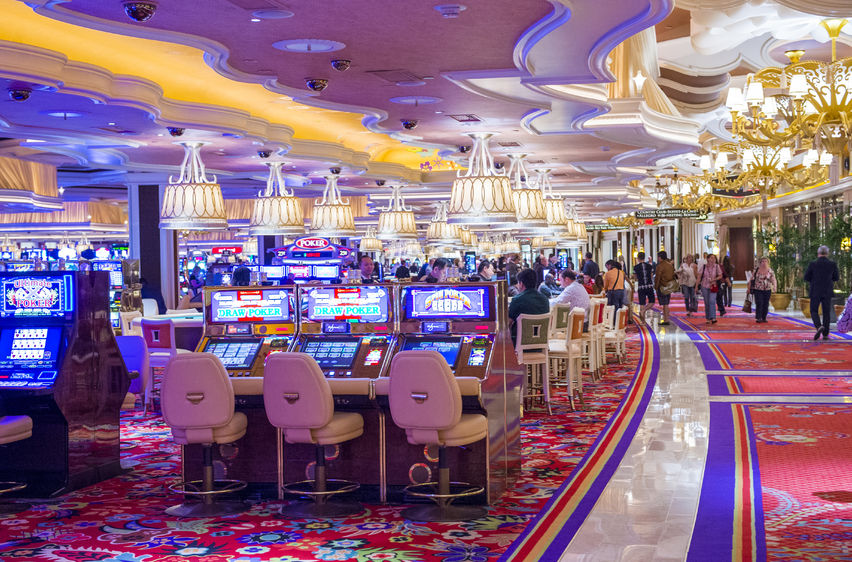 Wynn is a 5-star hotel on the north side of the Las Vegas Strip. The Wynn hotel was opened in 2005, and the sister Encore followed in 2008, with another 2,034 rooms. The service level in both locations is unrivalled and the hotels, stylish as they are, are permanently in a perfect state of maintenance.

Good to know: the cocktails at the casino, which is one best run casinos in the United States, are out of this world and are served by the finest-looking waitresses in Vegas. 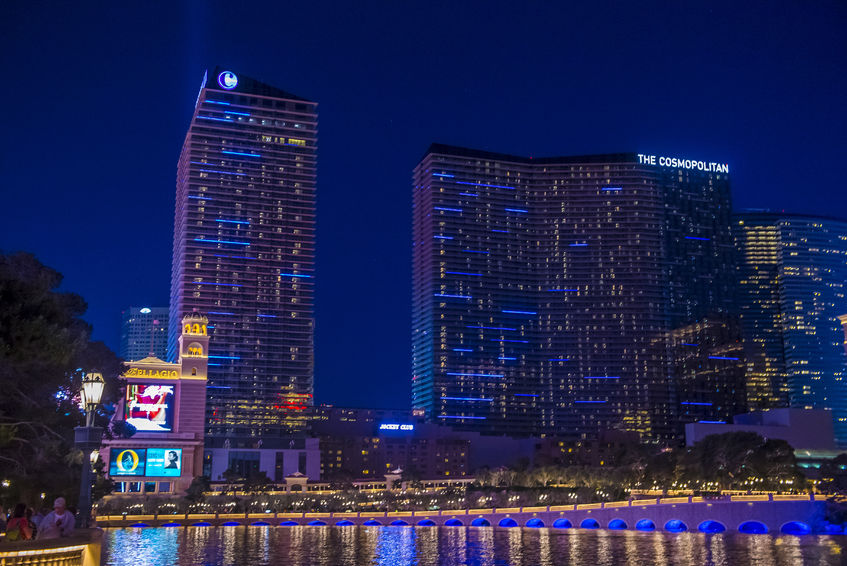 Good to know: if you take a room in the hotel, choose a terrace view room. Ask for a room on the 35th floor or higher, for an unobstructed view of those fantastic fountains.

The Cosmopolitan was opened in 2010, during the credit crunch, economically the least profitable period in Las Vegas in recent decades. At that time, the brand new hotel was forced to market the beautiful rooms at rock-bottom prices – anything to survive.

Despite this initial setback, the incredibly hip and trendy hotel-casino soon managed to steal the hearts of tourists. The beautiful architecture and the rooms with balconies and views of the Bellagio fountains – a unique feature on the Las Vegas strip, saw to that.

Must see: the Chandelier bar, with a fan of tens of thousands of crystals and three different levels. Not to be missed: the Wicked Spoon Buffet, together with the Bacchanal Buffet in Caesar’s Palace, is the very best Las Vegas has to offer in the “All you can eat” category. 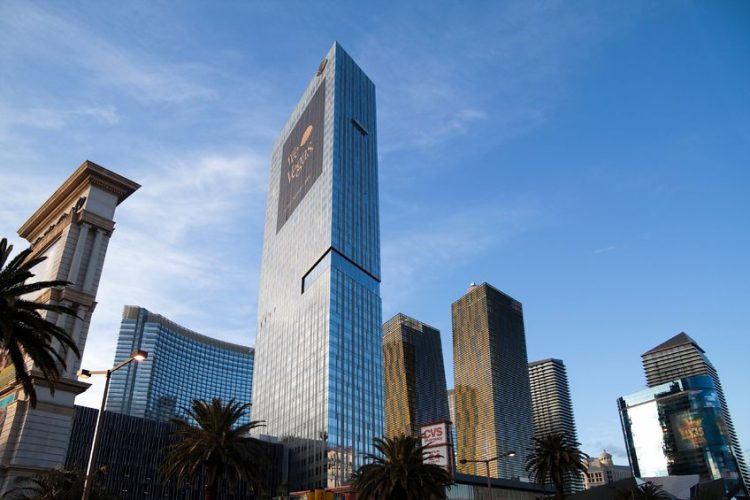 How big is the casino? The Waldorf Astoria hotel has no casino (Aria Casino is within walking distance)

The 47-storey Waldorf Astoria Hotel is part of City Center and has 392 rooms. Remarkable: the hotel’s beautiful lobby is located on the 23rd floor. Waldorf Astoria focuses on the top segment of visitors and has a level of service that other hotels can only dream of.

We were lucky enough to stay a few nights at the Waldorf Astoria, and although the hotel staff is never pushy, they will do anything within their power to make your stay as pleasant as possible.

The American Automobile Association has awarded the hotel five stars, and that seems more than fair to us. 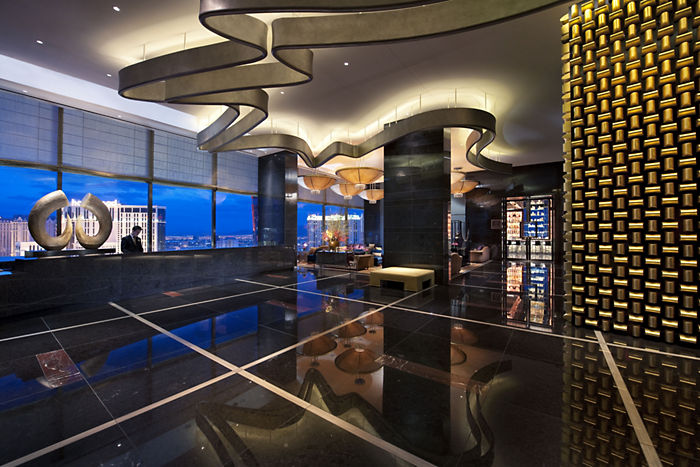 The rooms are fully equipped, and the beds are heavenly. This hotel has no casino but is located right on the Strip – the Aria, Cosmopolitan and Planet Hollywood are all within walking distance.

However, there is an excellent cocktail lounge with breathtaking views of the Strip, and there is the restaurant of world-class French chef Pierre Gagnaire: Twist. The hotel also has a serene swimming pool, a gym and a beauty salon. 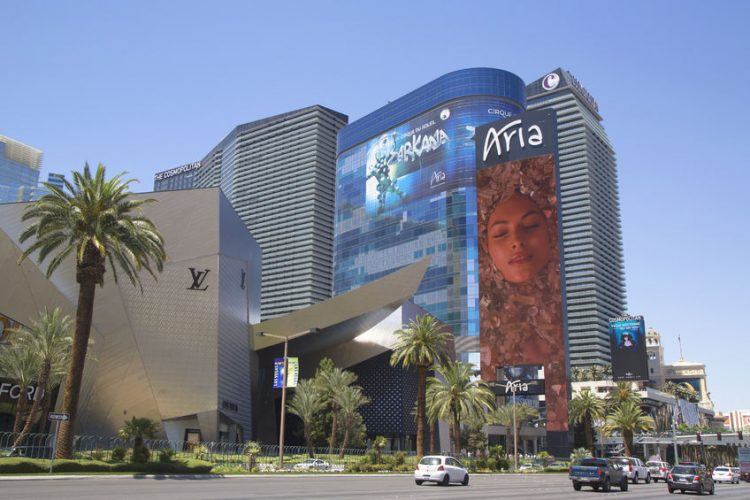 Aria Resort & Casino is the epicentre of the megalomaniac City Centre project, which consists of a collection of hotels, condominium towers and conference centres. The billions devoured by the project (City Centre costs over  $€  9 (!) billion) almost meant the bankruptcy of the MGM group. Aria is a beautiful spacious hotel with modern architecture and luxurious finishing. 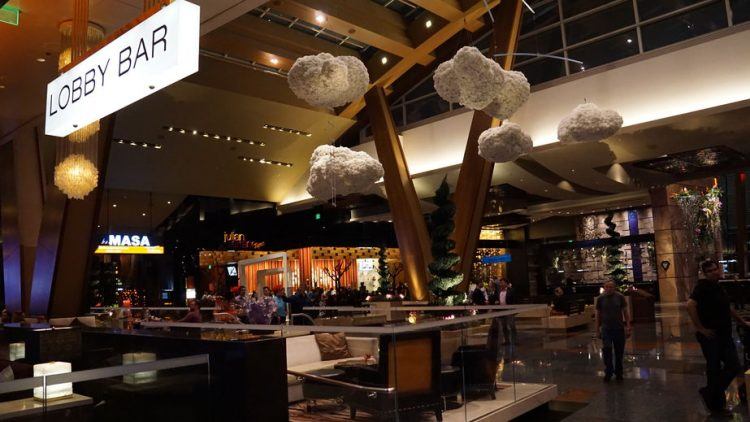 Aria’s nightlife is of such a high standard that you may never feel the need to leave the hotel.

From Jewel Night Club and several star restaurants to the huge 151,000-square-feet/14,000-square-metre casino, the huge sportsbook and the many state-of-the-art casino games, boredom is not an option at Aria. 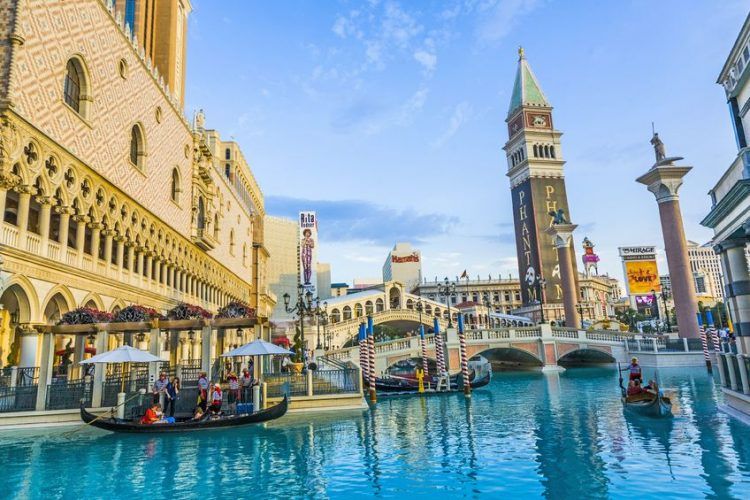 Nice to know: electric motors power the Gondolas and some gondoliers can belt out a real Italian serenade. At a surcharge, of course. This is Las Vegas after all.

If there is one hotel-casino that signifies everything Las Vegas is famous for, it is The Venetian. Built at a time hotels on the Strip still had themes, this miniature Venice is a must-see for every visitor to this beautiful city.

The resort first opened its doors in May 1999, when the beautiful Italian beauty Sophia Loren took the ceremonial first ride in one of the brand new gondolas. 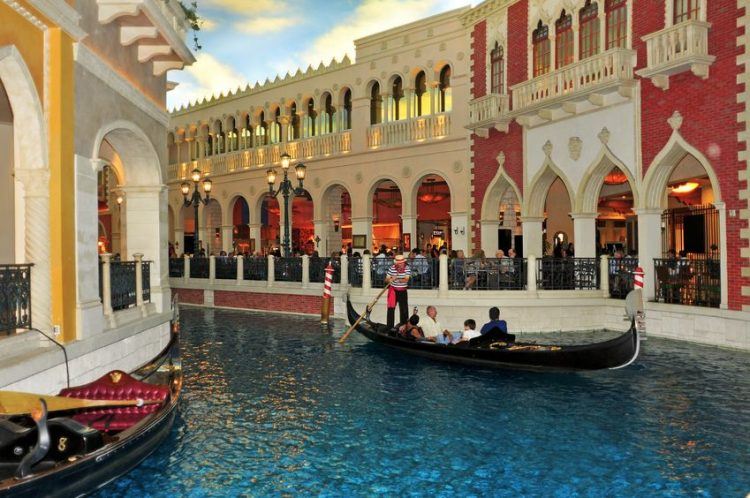 This resort, full of references to the real Venice, cost $1.5 billion – an unprecedented amount at the time. In addition to endless photogenic spots and shopping, The Venetian also offers an insane selection of restaurants and bars. In total, you can choose from no less than 42 different bars, casual eateries, 24-hour coffee shops and starred restaurants.

The only thing the Venetian doesn’t have? A buffet. 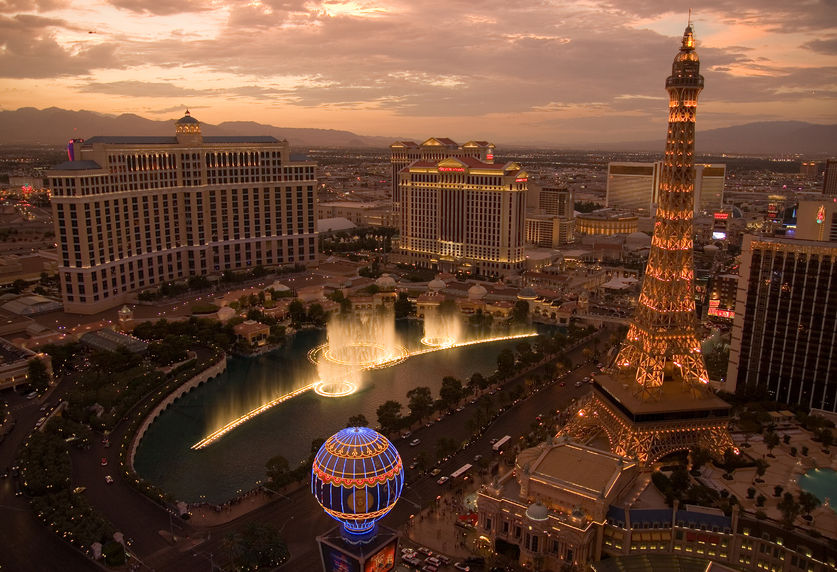 Fun to know: more than 5,000 lamps and 1,200 water nozzles are used in every performance of the famous “Fountains of Bellagio” show.

The Bellagio hotel was opened in 1998 on the Strip in Las Vegas, Nevada, United States. The hotel-casino, which was modelled after a rustic Italian coastal village, is built on the old site of the Dunes Hotel. Steve Wynn was the driving force behind The Bellagio, and this Las Vegas visionary went on to build the Wynn Hotel with the money he received from MGM Resorts when he sold them The Bellagio.

Famous and not to be missed is the musical fountain show in the lake in front of the hotel. Also worth a visit is The Conservatory, a changing flower show near the lobby of the hotel. The world-famous glass ceiling in the lobby and the restaurants overlooking the fountains make this hotel even more unique.

Red Rock Casino is a modern, somewhat smaller hotel that opened in 2006 as the showpiece of the Station Casinos group – several successful local’s casinos, where locals go to gamble and unwind.

Although the number of rooms is limited to just over 800, the casino is immense. Red Rock Station has a beautiful pool, soft pastel shades and a chic, almost Strip-like look. Red Rock Hotel and Casino Resort is one of our favourite places to visit, and maybe even to spend the night. 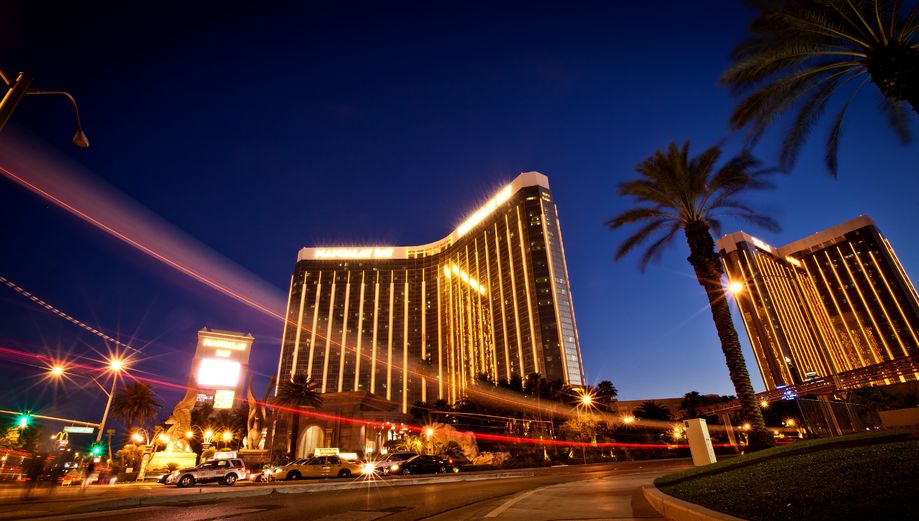 Good to know: Mandalay Bay is an excellent hotel and casino, but it’s not that well located on the south side of Strip – you’re just a little further away from the action.

Mandalay Bay was opened in 1999 and is owned by the MGM Resorts International Group. The striking gold-coloured hotel-casino is the first thing you’ll see when you enter the city of Las Vegas coming from California and, for that reason alone, will give many people a warm feeling. Part of the hotel is run by the Four Seasons Hotel, a chain that geared towards the wealthy, demanding visitor.

But Mandalay Bay has a lot more than just a gilt edge. The pool complex, complete with beach and wave pool, is perhaps the most beautiful of Las Vegas. Do you want to see a fantastic Cirque de Soleil show with crazy music? Then visit the “One” show – the ultimate homage to Michael Jackson.

You can eat and drink in one of the many top restaurants and bars, including two excellent steakhouses: Charlie Palmer Steak (in the Four Seasons) and Stripsteak.

Super tip: order a signature cocktail in the Skyfall Lounge and enjoy the most beautiful view of the Las Vegas Strip. 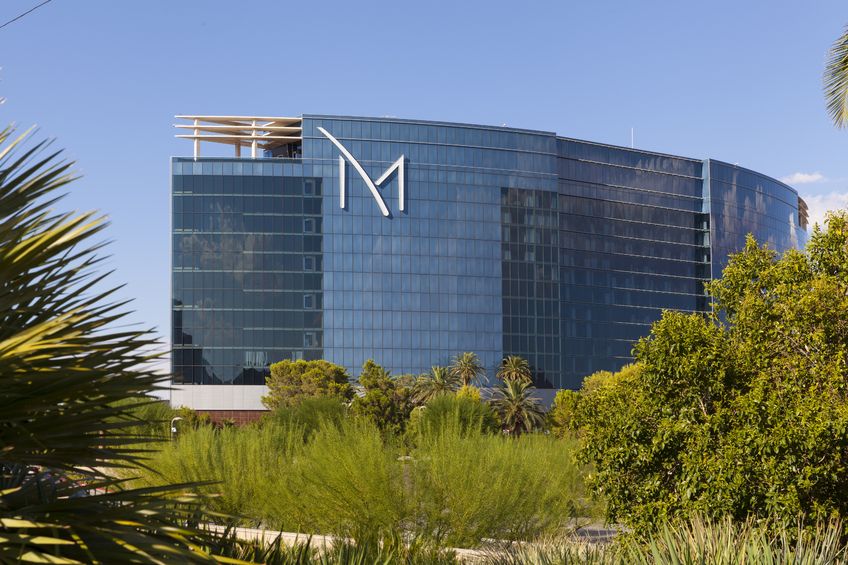 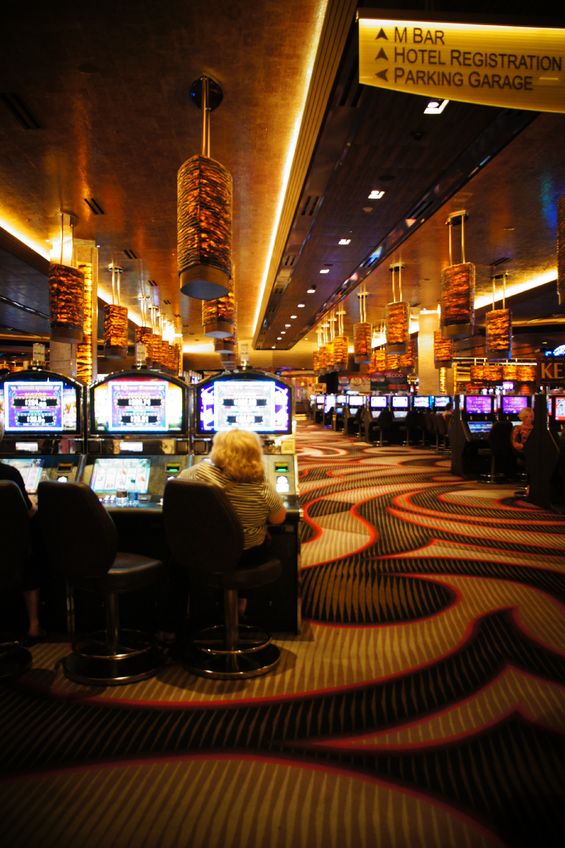 Fun to know: the Superbigwin.com team has judged the beds of M Resort as “The best of Las Vegas”. What a treat.

The boutique hotel-casino M Resort was opened in 2009 and is located on the I-15 South, about a 20-minute drive from the Las Vegas strip. It is a beautifully modern and small-scale hotel, which is ideally suited to help you recover from jet lag in the first few days.

Still, you will bathe in the luxury that you are accustomed to from a Strip Hotel.

The crisp, 91,500 sq ft / 8,500 sq m, M Resort casino looks beautiful, with beige, orange and brown colours and striking, narrow hanging lamps. It offers thousands of the latest slots and table games that will impress even the most seasoned gambler.

The M Resort buffet is also very popular with locals and tourists alike. 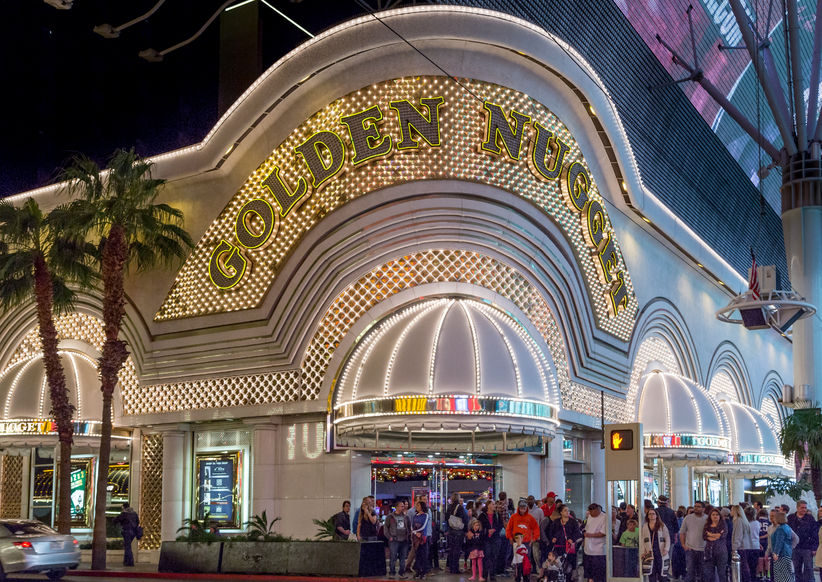 The Golden Nugget is the eye-catcher of Downtown Las Vegas and the only hotel on Fremont Street that can compete with the hotels on the Strip in terms of luxury, facilities and restaurants. Although the casino is on the small side compared to other Vegas casinos, every square inch is optimally utilised, always creating a crowded and lively atmosphere.

The Rush Tower offers the most beautiful and newest rooms of the nearly 2,500 rooms that The Golden Nugget has to offer.

The Golden Nugget pool is the only one in Las Vegas with a “Shark Tank” – the slide takes you in a tube that leads through an immense Shark Tank, full of sharks and other big fish. A beautiful sight.

These were the top 10 most beautiful hotels in Las Vegas

Of course, with every top 10 list, you have to make choices.

And didn’t the iconic Mirage Hotel deserve a place, if only based on history?

We have chosen to look a bit further than the Strip. Las Vegas Boulevard has a lot to offer, but there are plenty of gems off the Strip that are just as worthy of our attention.

One reason we like Las Vegas so much, it is continually reinventing itself. A little precursor of good things to come and possibly a future runner up to this list: Circa is coming to (down) town! 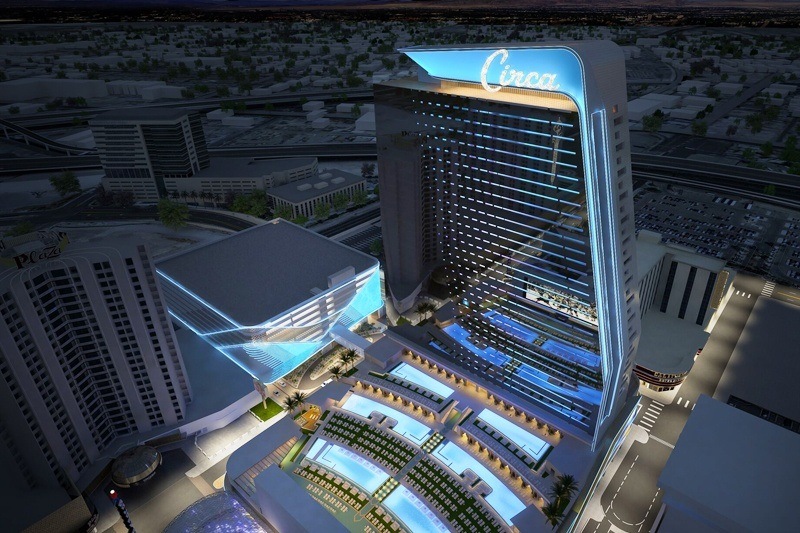 If you are thinking of booking a luxurious room in a lavish hotel with a decent swimming pool like the ones on The Strip, then you are out of luck in Downtown Las Vegas. However, a new game-changing urban project in the making, Circa, aims to change that when they open the doors to their resort & casino December of 2020.

Also, don’t forget to read our article 10 Las Vegas Must-Do’s, full of tips for fun activities in this crazy city in the middle of the Nevada desert.